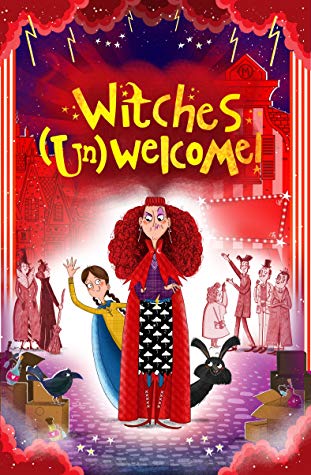 The witches came in all shaped and sizes. Some looked cheerful and expectant. Some looked fierce and determined. Some chattered to their neighbours, some didn’t. Some were all dressed up, and some were a total mess and clearly didn’t care. All were armed with a variety of serious-looking shopping bags.

Ah, the third book in this delightful and fun series. This time tons of shopping as Witch Sharp is setting up shop in the middle of Elsie’s tiny little village. Yep. She is sick and tired of sending mail and letters to people as she did in the earlier books. She got a fancy new widget from her sister (which made me suspicious given that they don’t like each other) which allows her to take shortcuts on magic. Yep, normally a shop isn’t something one makes with just a snap of the finger, which was a tad disappointing, I had expecting it was quite easy, but apparently you need tons of rituals and spells to actually make something. I can imagine that one would be happy with such a widget that allows you to skip all that. Of course, I had a suspicion that with making it a shortcut things would turn chaotic. So I was eagerly looking forward to seeing what would happen to the shop. Would something happen? Was the widget actually a good piece of magic?
And of course, I wanted to know what the witch would be selling. What kind of spells and stuff would one find in a witch store? Well, all sorts of things even for beginners there is something to be found. I just loved the kids range and I would love to shop there and get some tickle dust! Yep. Especially after seeing it being used later in the book. That made me want to stick my hand into the book and just grab it. 😛

Next to the whole shop setting up and witches popping up to visit (yes, tons and tons of witches pop up as soon as they hear about the shop), we also have some discrimination stuff going on. At least, that is how I would call it. Not everyone in the village loves the witches, some are downright rude about it. We even see things escalate and I was just rolling my eyes at the people. Stop being so single-minded people. The ending made me very happy though. I am glad to see how things got resolved.

Elsie is still such a fun character and I love that she is learning more and more magic. I hope in the future that she is able to learn more, maybe even become an apprentice. It was fun to see her do the shopkeeping, though she was clearly eager to help out Witch Sharp. I can understand, if one has to pick between boring stuff like vases and daily stuff and on the other side is sparkling and fancy stuff that may or may not go pop. I would pick the popping stuff.

I wasn’t always a fan of Magenta/Witch Sharp though. She is lazy, grumpy, and I really don’t get why she wanted to start up a store giving how bored she was throughout the book.

I loved seeing the witches pop up and check out the little town. I had a big laugh when I saw a trio of them doing a bbq over a sheep statue. I am glad that the witches discovered this tiny town, and I hope that they will add some more life to it, the town could use it. Something to give it a bit more sparkle and magic.

I wasn’t a fan of the major, why did people even pick him.. or did he just pick himself?

There is also a lesson of taking less shortcuts, not only Magenta/Witch Sharp finds out about this + already tries, but also Elsie. However I do hope that they will still use that magic. I get that it may make someone lazy, but once in a while shouldn’t be too bad.

Oh, and bonus points to Elsie’s parents/siblings. Especially the dad is a favourite here.

Of course, like the other books, there are tons of fun and magical illustrations!

I had tons of fun reading it, and I would highly recommend it to everyone looking for a magical and hilarious book with some realistic themes in it. I can’t wait for the next book!