A warm welcome to the Blog Tour for Take It Off the Menu by Christina Hovland! Oh boy, I just couldn’t resist signing up. points to the cover Just look at that! swoons

For today’s post I got a 250 word excerpt, and of course the book/author information.

Ready?? Then let’s get this tour started~ 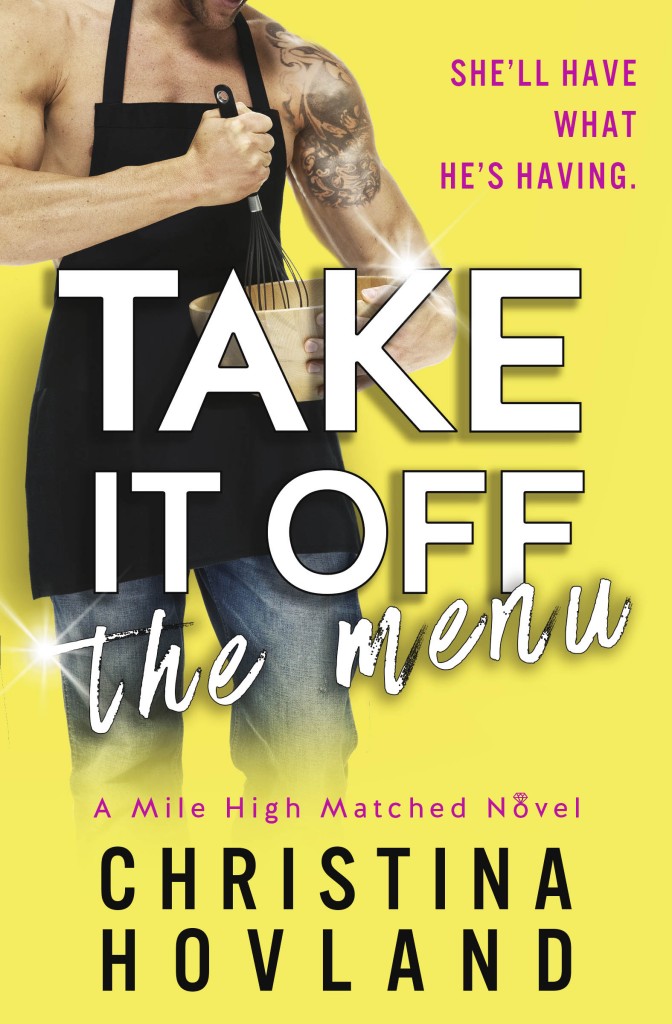 Saying “I Do” has never been such a mess.

Marlee Medford just got dumped. Yes, things have become ho-hum in her longtime relationship, but she was two days away from walking down the aisle with the man she thought was her forever when he called it off. Convincing herself that they’d be able to reignite their spark once the wedding craziness settled? That was easy. Suddenly finding herself without a fiancé? Not so much. Marlee needs to regain control of her life, and a weekend away with her friends is a solid first step.

One of Denver’s best up-and-coming chefs, perpetual bachelor Eli Howard, isn’t into serious relationships–especially the kind that ends in marriage. As if to prove his point that they aren’t worth the trouble, the wedding he was supposed to be catering just fell apart. Feeling oddly protective of the jilted bride–his little sister’s best friend–his weekend plans now involve a trip to Sin City with her group of friends. But it looks like he had a bit too much fun in Vegas when he wakes up married…wedding night included.

Marlee’s attempts at getting her life back together are failing miserably. Her ex-fiancé is taking the house, her chihuahua is intent on a love affair with Eli’s sneakers, and she’s now accidentally hitched to the guy who can’t even say the word marriage. With their quickie annulment denied, Eli and Marlee just have to hang tight until the divorce goes through. It’s just a little divorce amongst friends, what’s the worst that could happen?

Christina Hovland lives her own version of a fairy tale—an artisan chocolatier by day and romance writer by night. Born in Colorado, Christina received a degree in journalism from Colorado State University. Before opening her chocolate company, Christina’s career spanned from the television newsroom to managing an award-winning public relations firm. She’s a recovering overachiever and perfectionist with a love of cupcakes and dinner she doesn’t have to cook herself. A 2017 Golden Heart® finalist, she lives in Colorado with her first-boyfriend-turned-husband, four children, and the sweetest dog around.

She fussed with the edge of her shirt. “And about the thing that happened after we got married—”
“You don’t need to go there.” He squeezed her shoulder—the bare part exposed by the peekaboo sleeve. “It happened. It was great. Now, we move forward.”
“It was great, wasn’t it?” Her gaze cemented on his.
He nodded, not letting go of her shoulder. “And it must never happen again.”
“Agreed.” Yes, they’d been drunk. But they weren’t quite at the sign-the-wrong-name-on-the-license drunk. Deep down, she knew they both had understood what was happening.
And that was the part that made the hair on her arms stand tall.
It had been great. He had been great.
“Now, let’s never speak of it again,” he said, continuing to hold her gaze.
“Agreed.” A smile toyed with the corners of her mouth.
The thing she’d never fully realized about Eli before was that he had this way of giving his full attention when he was talking to someone. Not that he talked often, but when he did, he gave his full focus. Scotty was always doing ten different things. With Eli? When he talked to her? He made it clear she was the only thing that mattered.
He had to know that he mattered to her, too.
She slid from the seat and hugged him like a lifeline.
He hugged her back.
A totally platonic move, but it was quite possibly one of the most intimate moments of her life.
“Okay.” She sighed heavily.
“Okay.” He trailed a fingertip over her cheek.