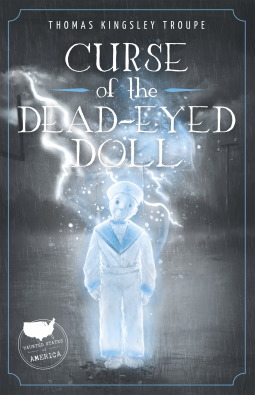 I am always looking for new books about creepy things, ghosts, hauntings, that kind of stuff. I love those stories, and so I was excited about this one. I am a bit confused with the age of the MC, he is 13, however with the writing style and how the character acted he felt much younger than that. There were a few mentions that made him rise back to 13, but generally I wouldn’t give him more than 10 maybe 11 years. This is also the reason why I am tagging this one as a children’s books. Normally I go by the age of the characters (0-12 = children’s 13-18/19 = YA), but in rare cases like this book, or Thea Stilton (with the MCs in college), I go by writing style and how the book is presented/looks.

This book features a very creepy doll, named Robert. You don’t want to mess with Robert. Our MC meets Robert when he has a field trip to the museum that features Robert. Like most teen boys he doesn’t give a hoot about any warnings or sad sob stories, so he makes a picture of Robert and him without permission. And from that moment things seem to go wrong.

I wasn’t a big fan of our MC. He was your typical boy it seemed, and I was just slightly annoyed with him that he would dismiss things that easily (especially given all the signs and the way the room felt (oppressive and horrible)) and also would tease his best friend. Who, just like me, has a very big NOPE to dolls. I don’t cry when I see them, but if I can avoid them then I am happy.

The things that happened to Al were pretty tame at first (flat tires, missing reports) but they got increasingly more creepy and dangerous as the book continued. I did like that most of the things that happened were things only Al could see. Which distanced him from friends and classmates. Which made it easier for the doll/the curse to do its thing.

I was glad that he told his dad and brother and I loved their reactions to Al’s story. thumbs up

The ending was at the first very creepy and OMG, but then it turned the other way. I am happy with how the author ended it. That was the way to end it, though maybe an epilogue would have been nice as well. 🙂

The book also has illustrations, and I quite liked their style. It didn’t always work with my copy on my Kindle (text was in images or the images were only small), but what I could see I liked.

All in all, if you want a creepy book about a creepy doll and a boy who has to learn a lesson, read this one.