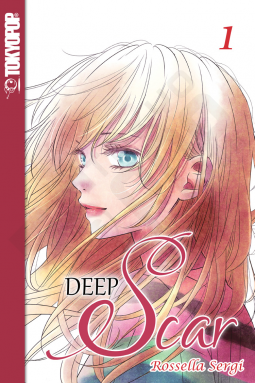 I received this manga-style graphic novel in exchange of an honest review.

Now that my vacation is all over and I am home again I can start with all my ARCs, and I got plenty. First up is this one. Not only because it releases tomorrow, but also because I am just in love with the cover. It is gorgeous. I am also loving the blurb, I am guessing I can expect some fun boarding school (or university/college) stuff to happen + some romance. I am also curious about the title. Deep scar? Oh my.

I will probably write down my feelings as I read and then put them together to make something that seems a bit readable. :P!

Wow, interesting meeting between the girls, I wasn’t a big fan of the roommate Veronica, that is just not a joke one makes when you introduce/meet someone new. Not to mention that, while I can understand that Lorenzo + Veronica are dating or at some way doing things, it may not be the best to give him keys to an apartment when you know you are about to get a new roommate, but maybe that is just me. I thought it was highly strange and I also felt a bit worried about Sofia.
Veronica keeps being a total bitch towards our MC. Even suggesting/telling her to break up with her boyfriend. Also holy wow, judgement much? So what if Sofia is 22 and still a virgin, why is that a bad thing? Who cares? Not everyone is ready to screw around at 15 or 16 or even earlier. Some people want to wait for the right guy, or the right moment, or just don’t want to have sex. And later on she makes even more dickish remarks regarding Sofia. I don’t get what her problem is. Just because someone is totally different from you doesn’t mean you should just make such remarks.

Wow, what happened there? He suddenly went berserk on her for no reason. I am also curious about why he is acting this way, not just with his bad boy attitude but also why he seems so adverse to Sofia.

Um, half a day just passed? What is up with this? It seemed to be much longer… especially given some events happening. is so confused And later again (after the event that I talk about in the spoiler) it is just a day? Ehhhhhhhhh.

Also while I do like Luca at times, I did think he was a bit overdoing it, plus I wasn’t happy with how he seemed to distrust his girlfriend. And I also wasn’t a fan how he didn’t seem to get that Sofia wanted to stay. That sure, shitty things happened, but that she is 22 years old and finally out on her own. Same goes for her parents. Holy hell. Helicopter parents much? They overreact so much, and just based on what Luca is telling them. Parents, please.

And really, this whole timeline and everything just doesn’t make any sense. This is all happening in a day? How? It feels like a month at least has gone by, but instead everything is being crammed into one day and it just doesn’t work.

And oh hey, cliffhanger. sighs some more I guessed we would get this one, given how Lorenzo acts and how Sofia seems to gravitate to him. Not to mention that there is this whole dark period daddy dearest was talking about. But will I be reading this one further? EHHHHHHMMM, not sure. Again, the time was an issue, it felt like things were crammed too much in one day/two days while it all felt like a month passed given the events. I can’t read Sofia. Lorenzo is just urghhh. The parents and Luca are horrendous…. So I am unsure if I will read further. Maybe yes, maybe no. On the one hand I am also curious about the whole events that happened to Sofia.

I also love the manga-styled art, it is really pretty. I especially love the character designs (and then Veronica/Lorenzo as top contenders).