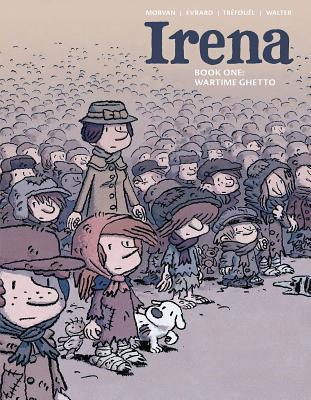 I have been interested in WWII stories since I was a little kid, so of course I had to request this graphic novel when I spotted it on Netgalley. A story about a woman who helps out in the ghetto and then decides to also help with saving kids. Holy wow, yes.

The story starts at the very beginning. We see Irena go to the ghetto, a terrible and horrible place, see her hand out food, talk to people, and then especially talk to the woman of a little boy. She is dying and she wants her son out of this horrible place. The wheels are now turning and we see Irena try to figure out if she should do this or not. Because believe me this is a decision that could impact not only her and the children… but also her work people. Everyone who read WWII stories know that not just the person doing the deeds is captured, it is often also people surrounding them. I loved that the author/illustrator showed the many emotions that went through Irena, see her try to figure out things.

I have to say I was definitely shocked by that event that happened just a bit after Irena made her decision. Poor kid. 🙁

I wasn’t sure how I felt about the future/torture/capture scenes, or at least how they were placed. While they do provide some information on Irena, at least the first did, I had just expected these parts to come at the ending, not in the middle of the story. It caused a disconnect for me. I am guessing this is meant to be her recollection while in captivity? At least that is how it felt after a couple of these scenes.
Eventually the story gets to the point of her capture and we see her still without wounds on the table. Poor Irena. 🙁 You know what is going to happen, you know she will be in pain for a long time.

We see who are also helping with this mission to save children, because you definitely need more people to trust and who can provide help. One person can only do so much, and I was happy that she found so many people to trust and who were all eager to help out with her mission. I loved how she ended her list of people with her mom (who was standing next to a picture of her husband and daughter which was a nice touch).

Seeing the ways they were saving the kids brought tears to my eyes. These people are truly thinking of any way to bring kids outside of the ghetto. She even hid one in a toolbox!

I was delighted to see Janusz Korczak pop up in the story. Given the date on the name card for the baby in the previous pages this was right before his death. 🙁

We also read of other gruesome things happening, like the story of Anton the driver whose cousin was forced to dig a mass grave and watch how people got murdered.

The ending, oh my gosh, I was just crying tears. That was absolutely gorgeously drawn, though it did make me feel like she died. But we all know she lived to be very old (or at least that is what the internet is telling me).

The art was pretty great, it reminds me of another comic/graphic novel but I just can’t get the name out.

I would recommend this one to everyone. Be warned you will cry your eyes out.