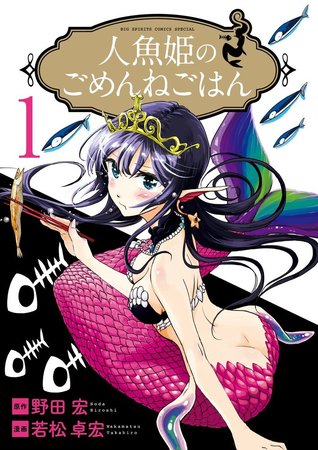 A mermaid keeps losing her friends to fishers and decides to go to the surface to mourn/give her respects to her lost friends… which end up in her eating them… and loving the taste.

I had such a laugh at the premise of the series and was looking forward to it, but I hadn’t expected this to be so funny. And thankfully the artist also doesn’t make it an eating a friend a week thing, as I was dreading in the beginning.

When another friend of her dies due to humans, and a bit of stupidity by the fish, she decides to pay her respects by going to the surface. At first she just heads to the restaurant (don’t ask how she knows, probably her mermaid powers) to pray for her friends, but then she hears someone tell her she should eat to show them her respects.. and so begins her spiral to despair. Yes, she loves the food, but you can see she feels uberguilty about it. Every time she gets back from a trip on the surface she instantly hides in her room, feeling guilty about it, but also imagining her friends as food. Yep, she is in that stage of finding a new food, everything is food now. 😛

I did think it was a bit weird that no one ate fish there, that is just how nature works in general, like that one fish also said. But I guess there would just be no story if the princess ate fish regularly.

We also read about how the fish is prepared which made me superhungry. Though maybe not all the time, but most of the time my stomach was just rumbling and demanding some fish as well. Sadly, I had to tell him no given the time/day.

What the hell is up with chapter 5/6, that just didn’t make any sense…. And really pulled down the rating for me. Yes, I was happy to see something else than life under the sea/see all the fish getting eaten, but this wasn’t executed that well and it felt off.

Happy to see we some of the other residents in the sea including the king (he is quite handsome), some other mermaids and sea creatures. I also quite liked that each of her lost friend had a whole backstory to add to the sadness of them dying.

The art was just fantastic. I love the style of it, especially the designs of the princess were really well done, though I did think it was hilarious she often looked like a yakuza when she went to the surface.

All in all, despite those 2 wth chapters, I liked this manga and I will continue reading. And I would recommend it!