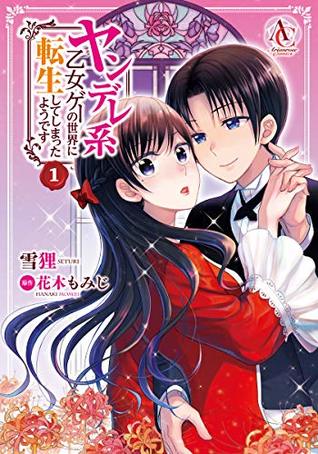 A girl named Lycoris finds out that she has reincarnated in one of the otome games she played in her previous life.

Now this sounds brilliant weren’t it for the fact that it is Yandere Otome Game. Yup, you heard that one right, a yandere otome game. And she isn’t the heroine, she is the rival! When we meet her the game has restarted again and we see that she is having a sense of deja vu, not much later and she remembers what is going on. What she already experienced and who she used to be from before. She is determined to not die, to not get killed, or to get jealous/angry/etc. so as not to trigger certain events. She also makes it her mission to make the yandere boys unyandere. Starting with her fiance Wolf.

It is quite an interesting premise. We have people go to isekais, we have seen people get stuck in all sorts of games, but I haven’t seen one that goes for the Yandere Otome angle. And I have to say it is pretty dang nice. Because she has to really watch out with what she does and says. It also doesn’t help she has limited access to what she remembers, she has senses of deja vu, but she needs an extra trigger for her to remember what happened and what she can do to prevent it. For instance with her fiance Wolf and his father. Something in another play happened to them and it may well be the catalyst for him turning yandere/feelingless in that play. It is very nice to see what kind of things Lycoris tries to save the boys.

Wolf is, so far at least, my favourite character. I am still a bit hesitant about him and his character. At times he seems real sweet and real caring but at other times I see something else shine through and I worry (for instance his jealously towards Shade). So I am just going to be enjoying the moments between him and Lycoris and hope that everything will go fine. crosses fingers They do make a cute couple though, and it is fun to see them get closer and discover new things about each other. I also love the letter writing.

I am still not a big fan of Shade. Not just to do with what he can do, but also with how he acts. I understand he is broken. I understand that shitty things happened to him. I get that he is hurting and that things still aren’t fixed. But Lycoris is trying. His cousin is also trying. People are trying to help him. He could be a bit more appreciative and a little less creepy and manipulative.

At times the story was a bit boring, but then it would pick up again and BANG we would be in a rollercoaster of OMG events. It isn’t just the guys who can be yandere. Everyone can snap in an instant. That cute lady? Think again.

I wonder how the next volumes will go. I am guessing it will be meeting the other guys and fixing them. Though I hope there is also a bit more than just that. Because that will get boring real fast. I also hope that we get some more information on Lycoris and her past before this game. We learn a few things in this one, but I want more information. I want more depth on her. Plus, I can’t wait for the moment that the kids go to school and the cast is finally complete.

The art is pretty decent. I do like the style and boy the artist draws some great yandere faces.

All in all, I will keep on reading, well at least one more volume for now.