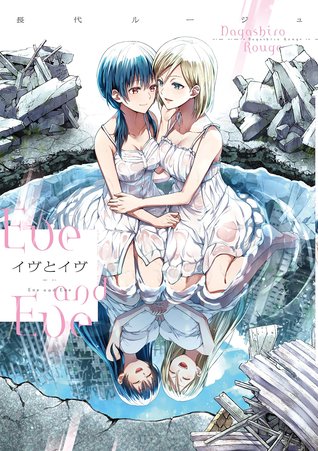 7 stories of romance between girls. In space, during the apocalypse, at school, with a sexbot. Featuring a boat load of sex and maturity.

I had heard about this manga and I am delighted I could finally read it. I am always looking around for yuri manga. These days I don’t really mind the sex so I actually look at times for books with that. I was also definitely curious as one of the stories featured the end of the world. I do so love a good apocalypse story, especially if it has love.

First story, the end of the world but two girls (Sayu and Nika) found each other, they can’t speak each other’s language, but they know they love each other. Plenty of sex, sexy scenes, and wandering through the desolate landscape. And then they find an alienship, well, very explicit sex, and something more. No, I won’t tell you what. Teehee.

Next up is the mangaka girl who got a sex bot and ends up falling in love with her, and Lisa with her. I loved the discussion between them about sex, how it was scary for the mangaka and how Lisa tried to understand, tried to follow, and then both decided to take it slow. I thought it was quite sweet, and I loved that they had this talk. Often in books you seem the one scared just doing it, but here there was a whole conversation. Respectful and the promise to take it slow.

And the next is a couple of friends wondering if they are top/bottom after finding out that the boys they have been shipping now have girlfriends. I loved Anzu and Emi, and I loved to see them duke it out who was top/bottom. I had a bigger laugh at the end when the girls came back and had something to tell their friends, especially the reaction of the guys was hilarious. 😛

The fourth story is about tow girls finding each other again. Yes, I was happy to see the sex scenes, and yes the chemistry is amazing between these two. But I am saying NO fuckity NO to the fact these girls are cheating now. And that it isn’t the first time. Holy crap. These girls. And the black-haired girl is even thinking it is all good and OK. No. Just no.

Then there is the fifth story which was an even bigger NOPE. Rape is a big NOPE NOPE NOOOOPE. I already had heard tales of this story as I read a couple of reviews before reading, but still, holy crap. Apparently there is some kind of curse? Some goddess fell in love with a person who she assumed was a guy, but was a girl, who was married. Instead of just moving along, that goddess did stuff, and then oh yes, raped that woman and impregnated her. And so the curse continues with each generation. Yup, and instead of Ichika telling the truth she drugs and starts raping the girl she loves.
And the rape scene was yeah, way too graphic and explicit. I felt highly uncomfortable. Especially given how it ends. Yeah, nope.

The 6th story is probably how the manga got its name. It is about two woman, Eve and Eve. Who will be together forever. In a very interesting way, I guess. I was kind of shocked by that, as I had expected something else (like them being frozen together to be preserved). Now the girls are forever for always and checking on humanity and their loves. The ending had me in tears though, and I can imagine how they felt.
How fun that we see Eko and Lisa again, and given their state, did they do it? Eeep!

And the epilogue takes us back to Sayu and Nika! Before all the events that happened in their chapter. They find a newspaper, chat a bit, and it ties back again to the Eve and Eve story!

So, all in all still loved reading this. Yes, the rape/cheating stuff was not my cup of tea, not at all. But I did like various topics and how things eventually did connect together in some stories. The sex scenes were pretty nicely drawn, a bit explicit, but hey I don’t mind it that much (well, with the exception of the rape scene, that was ughghgh). I met wonderful characters, saw sweet romance, and I just love a good romance in an apocalypse setting. Because right there finding love and hope isn’t easy and to have it is something amazing. I also loved the Top Bottom story as it was just a bit different than the other stories, it was funnier and it just stood out in theme.
The non-sex scenes were also pretty great, I like the character designs.
Big warning for rape and also if you are against cheating for that. But other than that the other stories were great to read. And I would recommend this one.