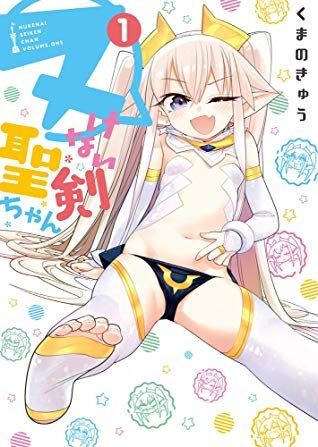 Meet Excelia a holy sword with a very interesting pedestal.

I was a bit put-off by the cover to be frank, a loli girl with barely anything on and pointing to her underwear? The blurb sounded intriguing to say the least, but I couldn’t resist and started reading it.

And boy, I am glad I did that. Yes, it is very on edge at times, but also funny as heck. Who thought that a sword’s pedestal would be her underwear. And she is refusing to take it off, choosing to wait for the real hero to do that. It was kind of sweet, though I would hope she knows her dear hero has died a long time ago, humans don’t have a long time to live.

In the mean time she is stuck with a new hero, someone who tried to pull her out of her pedestal but since she isn’t budging took out the whole thing pedestal and all. And yes, he is carrying her at times like that. She is able to transform into human form but it takes a lot of mana, not to mention she is actually lazy like heck. But the hero isn’t just going to drag her around with that heavy pedestal all the time (which I wouldn’t do as well if I was him).

The hero was a bit iffy at times. He wants the sword without the pedestal as that would make fighting much easier (because come instead of being able to stab a monster he needs to whack the beast or just force the whole deal inside… which doesn’t work), but since her pedestal is her underwear… you can imagine what kind of scenarios pop up. Even when she is in sword mode, we see her as she is human. Awkward…. FBI alert. Not to mention when he cleans her NOTE: she is a sword guys, swords do need cleaning or they will rust and such … those are some interesting coughs moments.

I do love Excelia, she is at times very deredere with things, but you can also see that she is really happy that she has a new hero who cares about her. She even gets so embarrassed she just turns back into a sword. 😛 Which is just adorable.

The art is pretty cute.

And I love seeing the travels with the hero and his sword and seeing them get closer with each new leg of their journey. See her find out about the world as it has been many many years since she last travelled anywhere.

All in all, despite the very on edge situations at times featuring a loli sword… this was still plenty of fun, I had tons of laughs while reading it and I can’t wait to see where they will go and how this pedestal business will end.