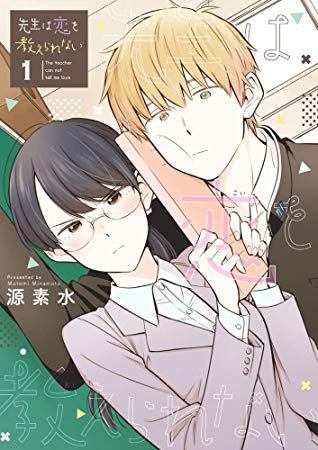 A cute manga about a teacher and student who like each other very very much.

I bumped against this one and fell in love with the cover. It was just the cutest. I just love how you can instantly see that these two are together in some way. And how he is trying to do more, but she is holding off. It is about a teacher (Yoshitaka) and student (Arase) who like each other verrrry much, but try not to get too close because of the whole teacherxstudent thing. She wants to wait for another 3 years (by then he is 20), but can they both wait?

This was adorable, you can see that both of them want to take it a step further but sensei is pretty strict about it (though we can see her mind that she wouldn’t mind more). You can see she cares a lot about him, for instance going to his work when it is very late to make sure he isn’t there (he is) or helping him studying as he is pretty bad at it, though she does like to punish him if he says or does something she doesn’t like (for instance allowing him to touch her boobs, and him touching her butt instead).

I do wish they would take things a bit further though. I would have been happy with a kiss. Now at times it was getting a bit frustrating that they were so clearly in love but didn’t want to do anything. And yes, teacherxstudent so it is tricky, but come on! ARgh!

I had a feeling I already read this one for some strange reason, I had a strong sense of deja vu the entire time I read it, but I had to add this book to Goodreads myself so I can’t have read it. Mmm. Maybe I read a couple of chapters? Or maybe I forgot to add it? I wish I could go back in time to ask the me from then.

The art was fab, I really liked how the characters are drawn and how well that matches with their personalities.

Well, I am definitely rooting for this couple. I hope they get closer and maybe get a relationship sooner than the 3 years they promised. I am not sure if they can keep it up that long. Teehee. I will keep on reading.