Welcome to the Blog Tour for Make Me Fall by Ember Leigh is still swooning because of the cover. I am so delighted I can be part of the tour!

What do I have for you in today’s tour? A brand-new excerpt, a giveaway, sexy teasers, and of course book/author information.

Let’s get this sexy tour started~ 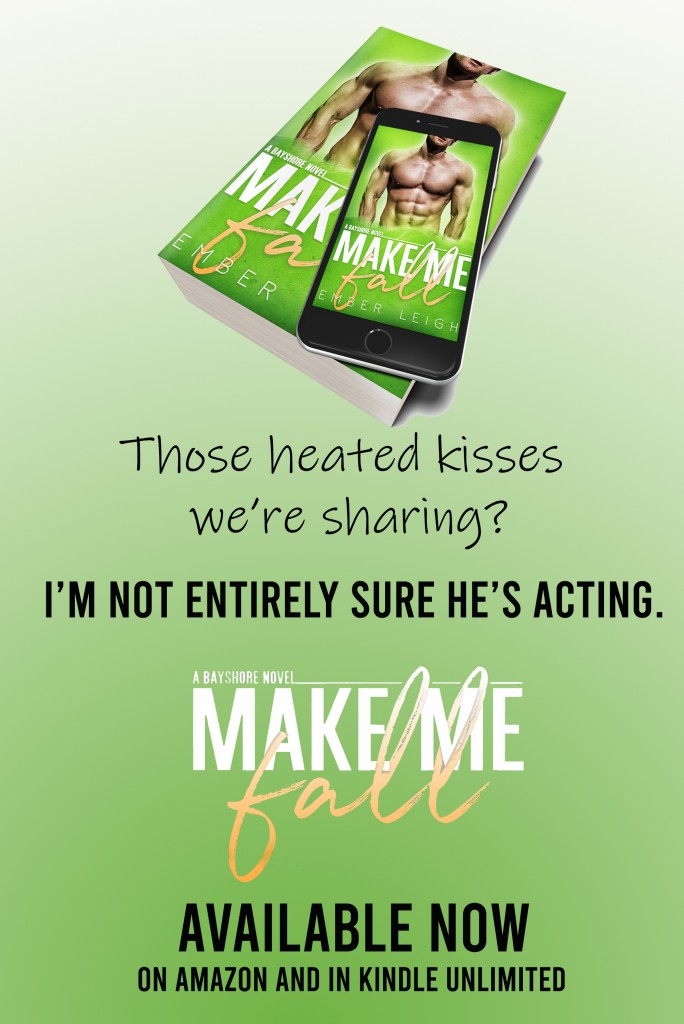 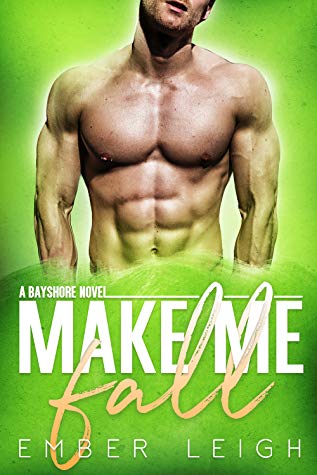 There’s one rule in my family.
Stay away from the Daly brothers.
We were raised to know them as users. Manipulators. But I only ever saw Connor as the enigmatic senior hottie who dropped into fifth period to teach us about the perils of drunk driving.

So when my first big girl job out of college ends up with us working at the same company, it’s heart throb city all over again. Except he’s way ahead of the game. Successful, talented, put together. I’m just a frumpy twenty-something in a quarter life crisis who doesn’t know a glue stick from a makeup highlighter.

He would never want me, even though he’s all I ever wanted in secret. So when we cross paths one night at the bar and one drink leads to another, he slaps me with an offer I can’t refuse.

Accompany him back to Bayshore, flight included.
Only stipulation? Pose as his girlfriend.
Our families will flip, but I’m not strong enough to say no to those baby blues, especially if it means I’ll have a chance to spend the next two weeks with my adolescent heart throb. 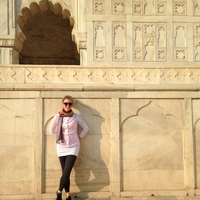 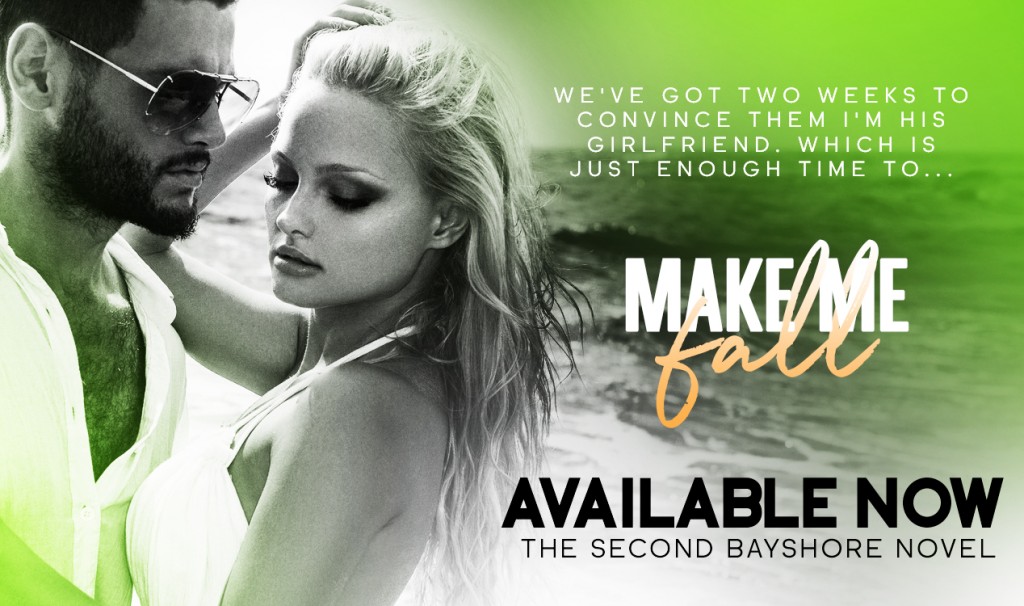 “So, are either of you seeing anyone?” Connor has directed the question to Dom and Grayson.
Grayson exhales loudly, leaning back into his chair. “Who has time? I’m too busy making money.”
“Same. Except, making money and saving people’s lives,” Dom says.
“Oh, right,” Grayson mutters. “Can’t forget that. Dr. Dom.”
“You guys are missing out.” Connor’s hand shoots out, grabbing mine. He squeezes it gently before charging ahead. “Love is the sweetest gift. I thought I had it all before Kinsley. And now…”
I offer a small smile to his brothers’ disbelieving faces from across the fire pit. This sounds ridiculous. Or maybe it only sounds that way to me because I know what a crock of shit it is.
“Isn’t that right, Kins?” Connor turns to me, and then suddenly I’m lost in his gaze, absolutely tumbling through space and time to meet him in his crystalline tractor beam.
“Oh. God.” A weak laugh escapes me. “I thought I knew what love was before I met this guy.” I jerk my thumb toward Connor for emphasis, even though it’s totally unnecessary. “I was wrong. He shook my world up. Like a snow globe.”
There’s warmth in his gaze as he watches me, and I can practically hear him saying yes, yes, that was great, as I finish talking.
“You don’t seem very affectionate,” Dom remarks, sniffing.
“Says the least affectionate man in the world,” Grayson adds.
Connor scoffs. “Trust me. We’re affectionate. I told her we’d need to tone it down this weekend because of all the family.” His arm shoots out around my shoulders, bringing me closer to him. We’re in separate chairs, so this is an awkward move. “Aren’t we so affectionate, babe?”
“Oh,” I start, swallowing a knot of nervousness. But when I look up at Connor’s face, the mischief in his gaze sparks something inside me. “The most affectionate. If we had an affection-o-meter…”
“To measure the output of our affection?” He prompts.
“Mm-hmm. Our reading would be off the charts. Like…3500 megahertz.”
“That’s really high,” Connor says, a smile curling his lips.
“It’s actually in the dangerous territory, according to recent studies.” It’s too easy to bullshit with him. And I love that this is flowing out of us.
“Ugh. You two are meant to be together,” Dom scoffs.
Grayson twists to look at Dom. “You are the living definition of curmudgeon. Why can’t you be happy for Connor? It’s hard for the middle kid to find success. Especially in a family like ours.”
Maverick snickers. “Jesus, Gray.”
When Connor scoffs, Gray is quick to cover his trail. “I’m kidding. The middle kid thing—it’s just a theory. It’s half-baked. It doesn’t even…it doesn’t even matter.” He’s finished his beer and opened another.
“We don’t need them to judge our affection,” Connor says, turning to me. But he’s saying it loud enough that I know it’s also meant for his brothers. He leans forward, tilting his forehead toward me, which prompts me to do the same.
“They wouldn’t be good judges,” I say. Our foreheads touch, and the grin that erupts on my face feels too silly to be forced. No, this is all real with Connor. Just my inner teenybopper freaking out that I’m touching Connor’s forehead. Maybe I’ll never wash it ever again. Maybe I’ll circle it with permanent marker so I’ll never forget.
“Horrible judges,” Connor says, and then brushes his nose against mine. I bite my bottom lip reflexively, my thighs squeezing together. I catch whiffs of his scent despite the woody smoke around us. He’s leather wrapped in spice, and my eyes flutter shut as I relish his masculine scent. “They don’t even know about that time we broke the affection-o-meter.”
Connor’s hand finds mine again, and he laces his fingers through mine. I giggle—honest to God giggling like I used to absolutely rip my sister apart for when she was a senior in high school and acting a fool with her flavor of the week. I never felt like this with my ex, that’s for damn sure.
“Okay, guys. You made your point,” Grayson says, waving us off.
“No, no.” Connor tugs my Adirondack closer so that the arm rests bump together. His hot palm finds my bare knee, and I swear to God my panties are soaked on the spot. “We’re not done making it.”
“You might want to make it up in your room,” Maverick muses. “You can make your point all night long, even.”
Connor swings that electric blue gaze back my way, his shit-eating grin out in full force.
If I didn’t know better, I’d say that the warmth in his eyes really was reserved for me.
As if maybe he saw me as someone he really could spend the night with—and then some.
But I should know better than that.
Because this is just pretend…and I damn well better not forget that.