Welcome all! Welcome to the Blog Tour for Tangled Roots by Denise D. Young. I am delighted to be part of this tour~ The book sounds fabulous, about a witch who does a spell and time travels to 2019, there are apparently swoony kisses and more. Eep!

For today’s tour I got an excerpt and also book/author information. 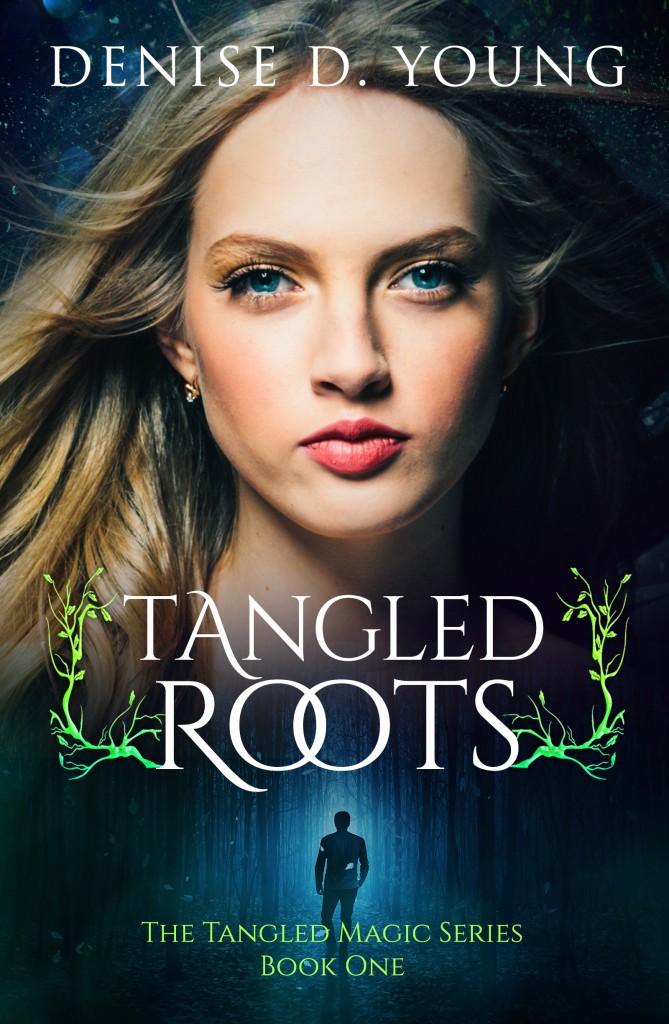 A beautiful witch lost in time. A brooding farm boy with magic in his blood and a chip on his shoulder. Dark secrets and shadowy magic. Paranormal romance with a time slip awaits in the first book of this new series.

Cassie Gearhart casts a spell in the forest in the summer of 1974. The next thing she knows, she wakes up to find the world irrevocably changed.

It’s 2019, for one thing. For another, all of her coven members have vanished, leaving behind only one man who holds the key to their secrets.

Nick Felson has sworn off magic, until a confused Cassie knocks on his door in the middle of the night, somehow missing forty-five years’ worth of time. But Nick knows falling for the captivating witch means letting magic back into his life—and that’s one line he swore he’d never cross.

Can Cassie unravel the mystery that transported her decades into the future? And can Nick resist the powerful magic and heart-pounding passion that swirl in the air whenever he and Cassie are together?

The Tangled Magic Series is intended for readers 18-plus who enjoy fast-paced reads, wild and witchy magic, swoon-worthy kisses, and small-town charm. The series is best read in order.

Equal parts bookworm, flower child, and eclectic witch, Denise D. Young writes fantasy and paranormal romance featuring witches, magic, faeries, and the occasional shifter.
Whatever the flavor of the magic, it’s always served with a brisk cup of tea–and the promise of romance varying from sweet to sensual.
She lives with her husband and their animals in the mountains of Virginia, where small towns and tall trees inspire her stories. She reads tarot cards, collects crystals, gazes at stars, and believes magic is the answer (no matter what the question was).
If you’ve ever hoped to find a book of spells in a dusty attic, if you suspect every misty forest contains a hidden portal to another realm, or if you don’t mind a little darkness before your happily-ever-after, her books might be just the thing you’ve been waiting for. 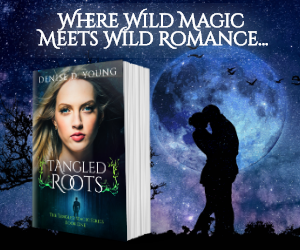 He almost kissed me.
I almost let him.
My fingers brushed my lips, still half-hungry. Whatever energy had sizzled in the air between us, it was brand-new to me. The magic I knew was wild and powerful. It could move mountains.
But this had been a throbbing beat unlike any I’d ever known. I wasn’t sure whether such magic intended to make my soul soar or shatter.
I grasped the edge of the island, still shaky though the energy had vanished as quickly as it had appeared.
Nick had his back to me, his fingers clutching the edge of the sink. Heat pooled in my belly.
“I’m sorry,” I said.
“For what? Time-traveling?” His voice was raw and gritty, full of unspoken pain. I felt it like a knife—as though the wound left in him were also left in me.
“No, for…” I shifted. The fog of confusion lifted long enough for me to see what a spectacle I was making of myself. “I’m not a loose woman, that’s all. I don’t bang on strangers’ doors at all hours of the night and seduce them.”
He laughed bitterly. “No, I didn’t think you did.”
I bristled. I’d never met a male witch before. I knew they existed, but Ginny’s coven had been all women during my two years as a member. “Are you making fun of me?”
He shook his head but didn’t turn to face me. “No.”
I saw myself through his eyes, then. A foolish girl, lost in time, wearing a ruined handmade dress, in a state of disarray.
And he hated magic. Not the way my parents and my brother hated it—because they didn’t understand it, didn’t feel it. No, I didn’t know how Nick could feel magic the way I felt it and turn his back on it.
“I’m messing up your night. I’ll leave you alone.”
Summoning what little grace I could muster, I marched out the back door. To where, I didn’t know. I wasn’t even wearing shoes.
I was down the steps when I heard the creak of the screen door. “At least let me drive you somewhere.”
“No thanks. I’ll hitch a ride.”
“No. It’s not safe.” He cleared his throat. “Look, if you are telling the truth, you should know things are different.”
I shot him a look over my shoulder. “I am telling the truth. But I’ll figure things out. I spent most of my life locked in a bedroom when I wasn’t at school. I made a life for myself back then. I’ll do it again.”
My heart was pounding, and I didn’t even know why. Anger? Fear? Something else? I couldn’t explain this rush of feelings. Was I floating or falling, coming or going, burning in the sweet flames or drenched in the summer rain? I needed space—and he sounded like he needed it more than I did.
“Have a nice night. Thanks for your help.”
I felt the pressure of his gaze against my back long after the shadows of night swallowed me.