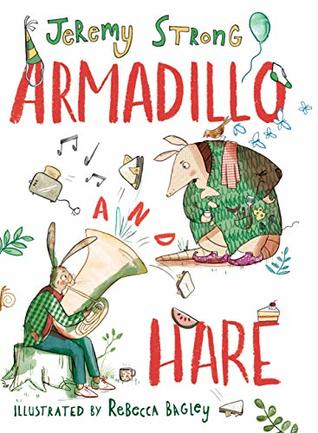 A quite delightful book about two friends, Hare and Armadillo.

I just couldn’t resist picking the book up, the cover looked so much fun and I love stories featuring animals as MCs.

This book contains several stories/chapters with each a new story about these two friends and also about the friends that live near them. Parties and celebrations, floods and friendship.

I have to say I really liked Hare… but I disliked Armadillo. He was tetchy/grumpy and I was just so frustrated with how he acted at times. Sure, he did show that he could also be kind and nice and friendly, but generally he was a grumpy one. Always going on and on about cheese sandwiches to the point that maybe he should find something else to eat and enjoy. Always having something to complain about. Really dude, if the fridge is empty of cheese go get it yourself. If you think you gained weight, do something about it. And then don’t complain when someone is helping you out. I am glad that I wasn’t the only one who felt the same way, Hare also mentions it at times.
Hare however? I liked him a lot. He fidgets when he is concentrating (by tugging his ears), he loves to read, he was sweet and friendly, and how could I resist a character who can play a magical tuba?

Yes, for real. A magical tuba. That depending on mood and its own will can spew out anything from sparkles to boots to toiletpaper. I had such a laugh when Hare started playing, what would come out this time?

The stories were a perfect length, not too long and not too short.

I loved reading about the other animals in the woods, from Wombat who loves doing tricks on her bike to a hungry jaguar.

There are also illustrations and the style fitted very nicely with the story.

I also like the writing style at times it was, I hope I get this right, written quite eloquently and the dialogues at times felt a bit like reading philosophy. Like the story went much further than just what you see. I hope I explained this one correctly.

All in all, I do hope we get more stories from this duo. And I would recommend this one to all.