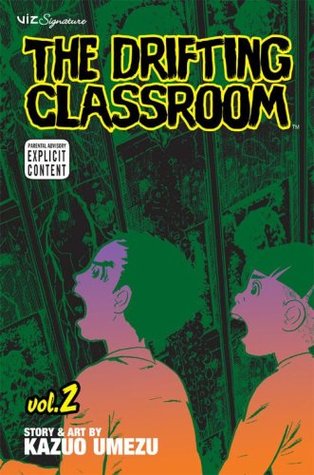 The second volume and things get more brutal and gruesome.

We start with where we left off, which is with something in the hand of one of the kids. Apparently the guy who is supposed to give out food is hoarding it all and he is doing anything and everything to make sure no one gets in.. Welp, those parts were definitely very gruesome. Plus, with the teachers and what happened to them? Why didn’t they just run, stop drop and roll? I was definitely disturbed by this guy, Sekiya, not only is he hoarding the food but he is also just slashing and hitting kids left and right as someone took one of his bread rolls. What the fuck dude, these are kids. You selfish insert some very mean words. I was rooting for Sho and his classmates to take back control.

We meet up with the tiny little kid again. Welp, I guess I should add one more thing to my horror books list of things not to do (for instance don’t sign any strange contracts, don’t just go outside when it is dangerous, etc.): Don’t play with strange kids. 😛 I wonder where he comes from and what he has to do with this whole situation. It is a bit too coincidental that he happens to be there when he wasn’t even at the school when it vanished, not to mention that Sho played with him just the day before things happened.

Ohhh, we find out some stuff, though that only makes me have even more questions. The kids find something in the endless sands around their school, something that was quite shocking and made me sad. But at least it was an explanation.

Really, this volume was way too disturbing. We see various things happen I was pretty shocked at it all. I guess people go bonkers in these situations though that doesn’t excuse them from doing that. I was even liking that one teacher.. but then he did all that crap and I just wished the sand would swallow him up.

I did like, well at least at first, that they took a car to go an excursion. To see if there was anything, anything at all in this hellhole. Well, they did find out things.. which made it all more confusing for me.

The last chapter, I was quite happy with that. Yes, it was a sad chapter, but I am happy we see some more of the real world again. Of Sho’s mom. Of what is going on in the real world. Though they are just as confused as Sho and his schoolmates. We at least find out how the school vanished, and holy wow.

I am a bit confused about the number of students, 800+. Where are all those kids? I mean we see a lot of them here and there but I would say that is only about 100, where are the 700 that are left? And why is there so little food if there are so many students? If you look at the breads and the flour and potatoes that is not nearly enough to feed so many kids and teachers.

So all in all, I am not too sure how I felt about this volume. Yes, it had plenty of exciting moments. Yes, there is mystery and horror. But the gruesomeness. The things that happened to the kids.. just were too much for me. I am not sure if I can stomach any further gruesomeness.