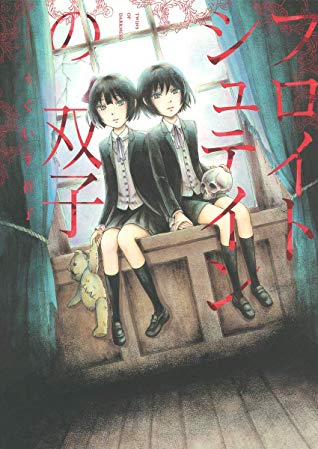 I am so delighted that with Halloween around the corner I can fully go for horror now. Sure, I read horror throughout the year, but I generally don’t truly search for it or limit my search to only horror. But in October the limits are broken and I just hunt for new unread manga. I love finding new manga each year.

This manga consists of 7 chapters + extras. The first three are about the Freudstein twins, the boy and girl you see on the cover, the other 4 are about various horrific horror stories featuring murder and aliens. But also a dash of romance. 😛

Let’s start with the first three chapters, namely the one with the twins. I have to say I was at times, a lot of times sure, put off by the twins. They were quite disturbing with the things they did. Voodoo dolls, sacrificing, scaring the living daylights out of someone, experimenting on them, and more. They reminded me heavily of Wednesday and Pugsley Addams. Though, dare I say this, a tad worse than those two, and that is quite a feat. I was feeling quite sorry for their poor tutor, a guy in college who was just trying to make extra money and definitely didn’t expect to go through what he goes through in these chapters.
We also see him try to flirt with a cute girl from his college, but there is a big twist, and OH MY. I didn’t see that one coming and I was absolutely delighted that the author added that to the story.
And despite that the guy gets experimented on daily, has to watch his life, at times we do see that he cares in a way for the twins. Though I am not sure if it is stockholm syndrome or something else. 😉

The next story is about a group of teens going into the woods… and then things got really weird. We do learn some things that happened, but the ending, whut? It was quite disgusting as well with plenty of gore.

The next story in this book is about a girl who confesses and the guy who gets murdered. It was quite sad as the poor girl just confessed and then the guy dies. There is a twist eventually and oh boy I didn’t expect that. I felt even more sorry for the girl that she had to go through that. Holy to the ending that was a fantastic ending, I was definitely startled.

The 6th story was my least favourite. A guy whose dad goes totally bonkers over aliens and eventually things get really creepy only to end very disappointing. I just didn’t like the dad, he was just way over the top and weird. Plus, what he did to his son? What the hell?

Welp, the 7th story was definitely a big WTF! A girl and her boyfriend finally have some time alone at home, you can guess what this means. Yup, sex. But before that the boyfriend has a few confessions to make… will she still like him? Holy crap at those confessions, and I just saw a big big death flag while he went on. I was just talking to my screen, telling the girl to drop everything and run.

And then there are the extras. With some more on the Freudstein twins who are now grown up, the MC from that story has graduated and is now teacher, and then the story about the girl confessing gets an extra part in which we see how she was planning the confession and her plans for her relationship, it was quite cute.

I quite liked the art in this one, at times a bit weird, but in general I liked the style. It fitted well for the craziness and bloodshed that happened in this one.

All in all, this was an interesting horror read, I am glad I found it. Yes, it was gruesome, but it was also darn good.