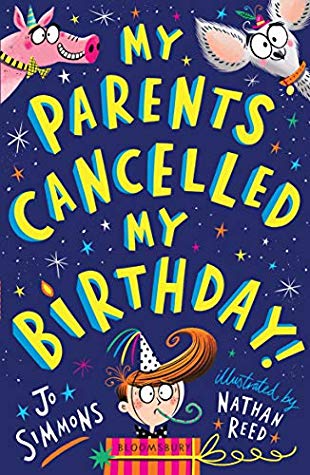 Meet Tom, it is almost time for his special birthday… but then his parents decide to cancel it.. what will Tom do now?

I was really looking forward to this book after the hilarious success of I Swapped My Brother on the Internet. I had to know if this one would just be as funny, and in the end? Yes, yes it was! I have been trying to think of a review for some time, but I will just make a good/not so good review.

Good:
-That Tom didn’t just sit down and pout, instead he tried to fix what was wrong + made a plan for it with pointers and all that. It was really sweet of him and I was rooting for him.
-Tom eventually got up and went to make his own party. He wanted to celebrate his birthday and if his parents were out… then he just had to think of a fabulous grand idea to make one of his own.
-His birthday ideas were just so fabulous and I had a laugh at how everything came together. Plus, this is probably a fun mention to kids, yes you can make your own party. You just need ideas, maybe a tiny bit of cash to buy some simple stuff so you can do some DIY.
-I loved his little sister. She was just so funny, but also sweet and awesome. What she did for Tom in this book was amazing, and I loved that she could make some amazing cakes.
-While I wasn’t always a fan of grandma, she did have her good sides, and I had quite a laugh that she thought the spirit of her flattened dog was around somewhere. Doing a seance, and even putting food everywhere (which caused people to step into it all the time).
-What Tom did to the pizzabox containing the flattened dog. I was definitely wondering when it would be found and what would happen then.
-The curse of the tooth fairy and what Tom tried to do to fix it. I laughed so so hard.
-Dad’s secret sauce.
-The illustrations. They just fit perfectly with the craziness of the book.
-The pig. Though I do wonder why they thought it was a good idea to keep it on a roof. 😛
-The chickenwhisperer thing. I had such a laugh seeing x control the chickens and how they reacted. Especially later on with the birthday party, dang those chickens are vicious. snorts
-The actual party! I laughed so much.

Not so good:
-The parents. I get that they are having difficulties, I understand that, but come on, you don’t cancel a birthday party for your kids. NO. Just find time, just at least have something. You can always do a bigger party when you have time, when you have money, but at least make that one day special in a way. You don’t just tell your kids that they will have to wait months. No. Just no. If your kid can create a day with little time and money, you can do that as well. 😐
-I did feel sorry for Tom, outside of the whole no more birthday for this year, he also had the feeling he had to fix the problems in his home.

As you can see, almost everything is positive, and I could probably think of more positive things as I had tons of fun reading this book. It was hilarious, funny, and a bit magical. I would definitely recommend this one to everyone.