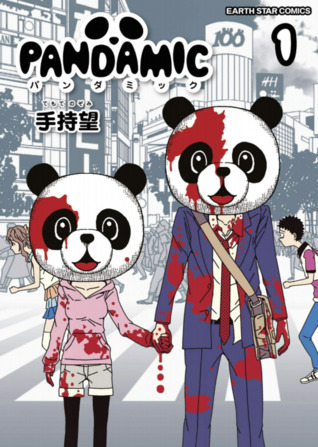 During a sunny day things go haywire in Tokyo. Panda mascots are rising and murdering everyone left and right.

Halloween is coming and so it is high time for some horror books and manga. This one was next on my list and while it was very gore and the art got worse as the story progressed, it was still a good read.

This review is for this volume + also the remaining chapters, as this manga was apparently abandoned/dropped without ending.

Welp, this was scary and full of gore. What seems to be a normal day ends in total horror. Mascots are out to kill you, and if they don’t kill or transform you to one of them… you will have to dodge some very big lasers shooting everything to pieces (which reminded me of that movie about a ghost cruise ship where people were split in pieces by thin wire). We follow Minita, a boy who has no presence, had a rotten life so far, and who now has to show courage and bravery. He has to protect people, he has to survive. It was quite interesting to see him grow in the short amount of chapters we have. At first he is quite wimpy, and yes, later on he is still a bit wimpy, but we also see him try to make some scary decisions and just going for it. That last battle was amazing (well, not in the way of the art and it was also kind of ridiculous) but I was also proud that he finally had the chance to stand up for himself.

It was filled to the brim with gore with people being killed left and right in various disgusting ways (from stabbing to lasers to being ripped apart by octopus… don’t ask), but I also like the survival aspect to it. Who will survive? Will this horror be stopped? Is it also outside of Tokyo, or just Tokyo? What started this? Who put up those antenna? What happens, next to become bloodthirsty, if the pandahead gets put on you (well, that was in part answered when our duo were able to stun an enemy and tried to get the head off).

The art wasn’t too much to my liking. Sorry. There were parts that were nicely drawn, but the characters… eh. And after this volume the remaining chapters just got progressively worse with each page. Really, at the end it just seemed pure chaos. I was just more reading in hopes of seeing what would happen and tried to not be too distracted by the ugly art.

I just think it is a shame that this manga got cancelled/dropped/abandoned. I would so have loved to see a proper ending to it. Not just for Minita but also for others around him. This manga has a lot of potential with the mascot murderers, the strange girl who is trying to help out, the survival aspect, and it is a shame that we will never know how it ends. I guess we will have to think of our own ending, which for me would be a happy ending for everyone. No more deaths.