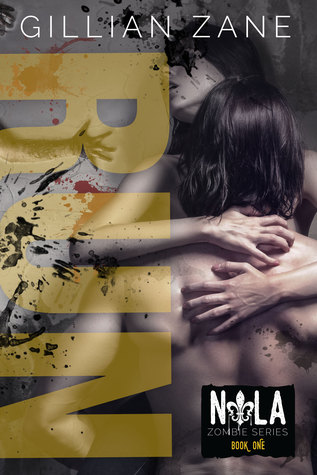 “Zombies were probably munching on my friends and family as we speak and I was contemplating orgasms in the apocalypse. But it couldn’t be helped.”

So this was a bit different from most of the zombie books I read, whereas I have read books with zombies + survivors having sex, it wasn’t as explicit as it was in this one. I had fun reading it though despite some issues I had.

So this short zombie story is about Alexis, a semi-prepper girl who gets stuck in the midst of a zombie apocalypse kilometres from her home. She has to get home quick. I am still not sure on the whole prepper thing, it is something I only see in US books or movies/series, I haven’t seen it happen in any of my Dutch books, nor have I ever heard of anyone who preps for these things. Still it was quite fun that for this once it was a girl who prepped. When we get to her house and see the things she stocked, holy hell…. this girl is quite prepared, or actually over-prepared. 😛 I did love how kick-ass she was with zombies. Yes, she wasn’t always 100% OK with it, you saw that it hurt her, you see it wasn’t easy, but still she did it. And with an axe even. I love a girl who can handle an axe.

On her way home she meet ex-marine/military Blake. They quickly form a bond (and more). I did quite like Blake, he was hot and sexy and he knew how to do things which is a must in situations like this. He kept his mind cool. But he was also a perfect gentleman. He did help Alexis when she needed it, but wasn’t overly acting like a knight, which is what I see in other apocalypse books at times. There is a hot guy and instead of letting the girl do things on her own he has to protect her every move. So I was happy with that.

Later on we meet Blake’s friends, who are also military/mercenary and together they group with them to head to a safe spot. I wasn’t sure how I felt about these new people, I would rather have had Blake and Alexis just wander around a little bit more. Discover some more things.

The ending and the twist there. Holy, I just wanted to kick Blake in his precious nuts. Hard. That is just not what you do. That is a very effing NOPE. I won’t spoil it, but I think most people will be pissed at this guy after this.

The zombies are properly scary, and it was also kind of funny to see how people just tried to help people who were bitten. Guys, first rule in chaos like this, care only about yourself. It sounds heartless, but in each movie and book you can see what happens. Just for your sake, run away. Those people are dead.

Also I just adore the cover. Sexy, but also dark and given a hint to the story behind the cover.

Now for the 4 issues I had with this book:

Issue 1: The instant lust. I am not into instant anything in my books, and it was just a bit too much how these two just wanted to rip each other’s clothes off as soon as they met. Hello, zombies! I get that you want some relaxation in between all the things, but this was just a tad ridiculous, these two just went for it like animals.

Issue 2: That the girl, within just a short time, wavered between loving the guy and then thinking it wasn’t a good idea to love him. Eventually even saying THAT even though it has just been a really really short time.

Issue 4: Just having sex without a condom. You don’t know where his dick has been. Do you want a STD in the midst of a zombie apocalypse? Or get pregnant. I know she is on the pill, but the pill is not 100% reliable. You can still get pregnant.

But all in all, yes, I did like this one, and yes, I am going to be reading the other books… if I can find them of course. I want to know how the story continues. If you like tons of sex and zombie action then be sure to check this book out.