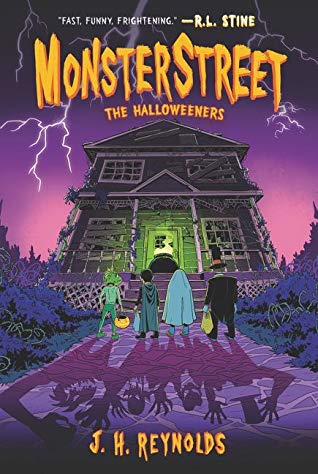 What if Halloween monsters become real?

After trying to read the first book and not being a fan of it I was a bit worried about the further books. Still I wanted to at least give this one a try. And I am happy I did as it was quite fun!

Since I have been trying to write a review for a while now and still cannot find the words to correctly weave a review, I will just write a good/not so good review.

Good:
-The delicious candy and the one note that was with it. I guess it was all a plan of the witch, she knows very well that when there is delicious candy kids just can’t stop at 1. 😛
-Seeing the kids turn into the monsters. That was quite fun and interesting to see and also to see that at times they weren’t entirely monsters but that the kids were still inside… somewhere. I had a laugh at the fact we had a vegetarian vampire and how it went totally bonkers on everything vegetable/fruit.
-The Halloweeners, I would love some more information on this and how long it has been around. It seems to have been around for ages with photographs of the other groups dotting the walls. I would love to join such a group if Halloween was as big as a thing here as in the US.
-The hilarious things that happened while Fisher was hunting after his friends and trying to capture them. The chaos was just wonderful and I had a laugh at the reactions of the people. First thinking it was just an elaborate joke, and then finding out that those 3 are really monsters!
-Trick-or-treating. Something I just love seeing in books as we don’t really have it where I live. I would have loved to be a kid and get free candy, get to wear a costume, and more.
-The cover, it just so perfectly fitting with the book and the story within. Plus, it is delightfully creepy.
-Fisher. While he wasn’t having the easiest time due to his mom and moving all the time, he did find friends and I loved how despite only knowing them for a short time he fully went for it to save them. To make sure they were fine.
-Ava. While I wasn’t always a fan of the girl (cheating is a big no no) but eventually I grew to like her.
-I loved how the author described the town, eventually I could just see it. I would have loved to live in this town.
-The ending was great, I won’t spoil anything, so I will just keep it to this.

Not so good:
-The mom. I just wasn’t a too big fan of her. I get that, eventually, we find out that she has her reasons for acting the way she did, but still I wasn’t happy. She expects her son to just be happy that he keeps moving ALL THE TIME, instead of just telling her son honestly why she doesn’t like Halloween she just grounds his ass and then goes totally bonkers and even calls the police when he is missing, later when her son tries to save his friends (and she knows why) she purposely keeps him in the house. Really? Whut? And sure, later we do find out more about mom and why she is acting so bonkers, and I could sympathise more, but still.. just talk to your son. He is old enough to understand. Better to hear it from you.. then that he had to find out by himself what was going on.
-How the boys treated Ava, and how it took her doing some stuff and Fisher convincing them to finally accept her. Then again, I have to say at the beginning I wasn’t a too big fan of her as well, but that was due to her cheating with trick or treat.

All in all, as you can see I had plenty of fun reading this and before I knew it the book was over. I would recommend this one, it is a fun book perfect for the Halloween season.