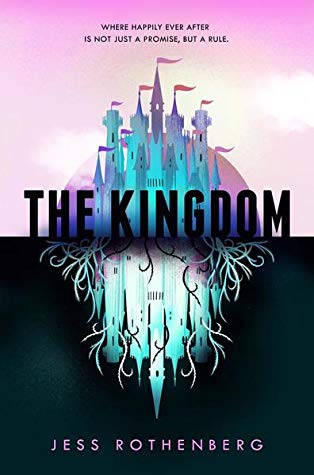 “Like Wendy, John, and Michael Darling on the night Peter Pan taught them how to fly – I think one happy thought. In my pocket, I have a knife.”

This was one of my most anticipated reads of 2019 and it sure didn’t disappoint. If anything it was even better than I had expected! I am still completely out of words but I do want to write a review for this AMAZING book!

Meet Ana, one of the seven Fantasists which are kind of like cyborgs/humanoids. She is engineered to make people happy in the park. She is one of the princesses there along with her sisters. At the start of the story she seems relatively happy in the park and in her role, but we do see that she is slowly developing something more of a conscious, awareness. Especially when she meets Owen.As the story continues we see how she is struggling with what she needs to do and what she wants to do. And she isn’t alone in that. Pania and Eve, two of her sisters, also seem to evolve and we also see what is going on with them through the eyes of Ana, the reports in the after parts. I did feel sorry for Ana, as in the start it is pretty hopeless for her. She wants to know more about the world, about what is going on, why she is feeling what she is feeling, and she knows that the outside will never be reached by someone like her. I just wanted to hug her. I wanted to help her out.

The book isn’t just about Ana and her growing conscious, but also about the murder she apparently committed. But did she really do it? Is she really capable of that? I loved the mystery aspect to the story, I was definitely curious if she had really done it. In despair? In love? In jealousy? Something else?

I loved reading about the other sisters, about the park, about how wonderful it all seemed. How magical. Yes, even with all that is going on, I would still love to visit it.

We see that not everything the park is OK. There are a lot of things going on in the park, for instance the hybrid animals which seem totally fine but there are mistakes, there are things wrong. But we also read that maybe not everyone treats the Fantasists as princesses. There is talk about sexual abuse (I would call it that as their memories are wiped and I am not even sure if they know what is happening to them when those people do those things to them). And then people are looking at them as if they are dangerous, freaks, bad things. I felt sorry for the Fantasists, no one deserves that kind of stuff happening to them.
Then there are lies, tons of them being told to the Fantasists. Probably to keep them from being too curious, too eager about the outside. Which does have a reason, which we find out about quite soon and then some more later on.

I loved Owen and Ana together, they really were supersweet together. Though at times I just wanted to hit Owen on his head for how he acted. I get that Ana is a bit frustrating, but come on, she can’t always help what she does. I still was rooting for them to get together. For him to help her out. For her to find out what first love is.

There are tons of twists and turns in this book and I loved them all. Each time I thought that maybe I had cracked the case but then something would happen and I would be back to my starting point. This book will keep you on your toes, believe me.

The book gets increasingly more awesome with each page, it was fantastic from page 1, but then just got even more better. I just didn’t want the book to stop.

The ending was a tad bit unsatisfactory, but I still liked it. On the one hand I would like to know more about what goes to happen, on the other hand I don’t think I want another book.

All in all, a terrific fabulous book that I would recommend to all. And sorry if my review is a bit chaotic, but this book was just WOW.