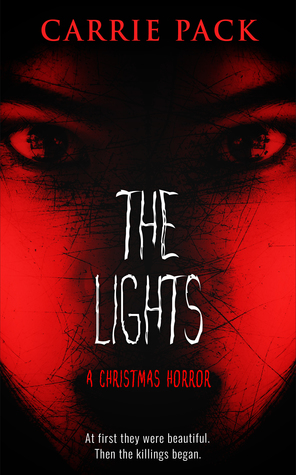 “Before the horror that was my darkest Christmas, the lights were a welcome sight.”

A fantastic horrific gruesome book that is perfect for both Halloween and Christmas. It is like The Nightmare Before Christmas, a movie both fitting these two holidays.

It is all about a sweet town named New Brighton. The townspeople are looking forward to Christmas, but before that there is the Festival of Lights. This year the lights are a bit different, the mayor wanted to be a bit more ecological… but is that wise?

Our MC quite soon notices that something is off, I did think it was amazing that she saw that for it wasn’t something that most people would see. What was wrong? The littlest kids of the town were totally entranced by the lights. Murmuring. Whispering. Acting like little zombies. But that is just that at first, but then not many hours after that there are screams next door. Our MC sees a little girl covered in blood holding a knife… and the next day the MCs mom has to let someone into the house… and well… they find whatever remains of the two people living in the house. And that is when the story truly starts. I loved this beginning, and I loved how things seemed to settle down at first, but then kicked off even harder and we got more and more gruesomeness, more creepy little kids doing creepy little things.

Yes for real, it is a trope that we see in other books as well. Seemingly cute kids suddenly turn into something different. Something murderous. And like with most books the adults don’t believe it when teens or someone tells them that something is wrong, because just look at how adorable these kids are. Plus, they are probably just distracted by the prospect of something (in this case Christmas). It was a bit annoying at times as things were clearly happening and it seemed the people in the town just turned a blind side to it. The kids really got more and more creepy with each passing day. Eventually it just seemed like the only people alive in the town were the 3 teens and the kids. Which was a bit odd, but then the MC also mentioned it and I had a chuckle.

The murders are superduper gruesome and a bit too gore at times for me.

Later on we learn more on what is going on, we see our MC make a plan along with her friend and her sweet girlfriend, try to disable the lights, and then later they even find out something else. Something that had me gasping. Oh my! I would have liked to see that developed some more as I still have questions.

The ending was excited, horrific, scary, but also a bit of a letdown. I get that the book had to end, and on the one hand it was an OK ending, but on the other hand it felt rushed. Which is a shame.

I did like our MC, and I also liked her girlfriend. The other friend was also nice. I loved the bond between the characters and how strong and brave all three of them were.

I did feel sorry for the MC, especially as the story continued and got more and more scary and horrific. Her little brother is also entranced by the lights, and she is noticing quite quickly that he is just not the same and she is afraid of him, but also afraid for her family. Thankfully, she has her girlfriend and her friend who were there for her.

All in all, a great horror book which can be read during Christmas or Halloween, pick a time. Or just read the book again. 😛