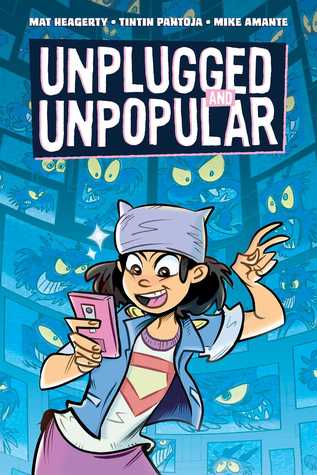 I have had this one on my Netgalley list for a while and decided that today, while I am still sick and having a high fever, is the right day. Meet Erin, a girl who lives in a world full of technology but gets unplugged when she does something stupid. From that moment on she sees aliens and discovers that people (including her brother and grandma) are missing and no one remembers them. The aliens are planning to take over, domination over everything is their goal.

This was a delightful and fun book, though I wasn’t always happy with Erin’s decisions. For instance just grabbing a giant rock and breaking the window/door of the library. Or going along with what Wendy wants.
But besides that I still liked her and how strong she was, how when she found out what happened and got to terms with it she decided to kick some ass and try to save the world. Along with her grandma and other old people who aren’t plugged into the net (as that is one of the important things if you want to see the aliens).

We find out more about the aliens and what their plans are. I have to say it was a dastardly plan and perfectly executed. If Erin hadn’t lost the privileges to her phone they may have gotten away with it. But I do think that Erin’s grandma would have done something to make her grandchild see the light, that grandma was so kickass I can’t imagine she will let her granddaughter be blind to what is going on.

I did think it was funny no one saw the aliens or people who have gone missing but returned (for instance grandma). It did look funny to see people fighting air while we know they are fighting aliens.

I was a bit sad to see the library in such disrepair and sadness. I wonder why the brothers didn’t at least try to keep it neat and clean, given their inventions they shouldn’t have problems with keeping up with repairs for the library.

The ending was terrific and very exciting, though there was one thing that I found a tad too magical and easily solved. Something involving tea and an eye.

The art was pretty colourful and fun, though at times I wasn’t a fan of it (perspectives wonky, characters a bit weirdly drawn).

All in all though, I did have fun reading this one and I am glad Netgalley/publisher gave me a chance to try it out.