A princessy welcome to the Blog Tour for The Princess Plan by Julia London! I just HAD to participate, look at that gorgeous cover with a dress I so need in my life. 😍

For today’s tour I got various things for you to enjoy! For instance you can read an excerpt, or join the giveaway, and I am sure you are curious about the book and author so I got information for that as well.

Let’s get the tour started, shall we? does a curtsy 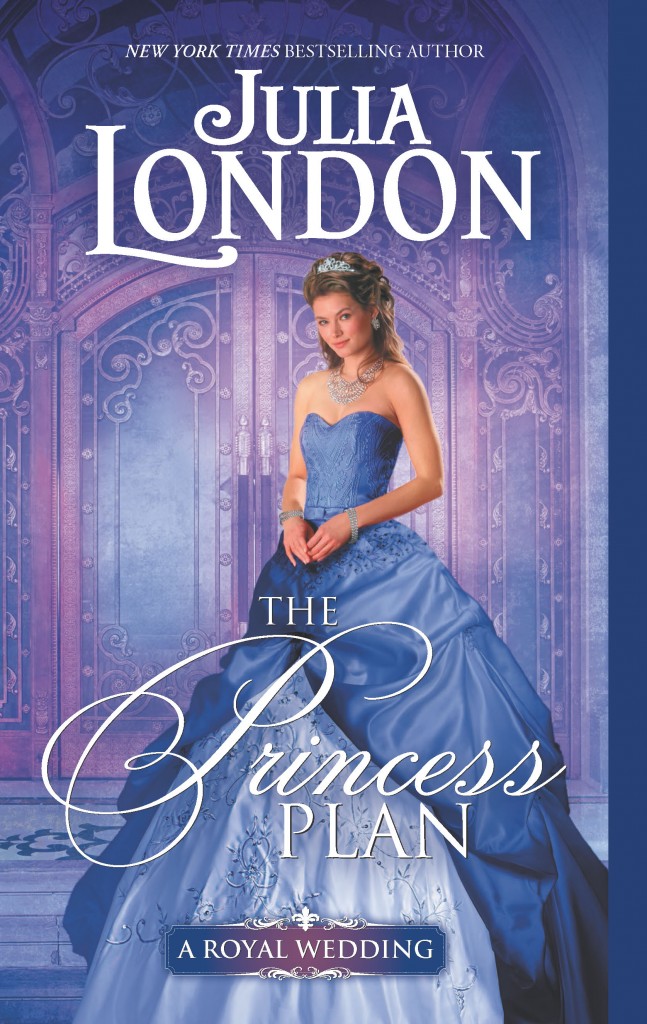 Princes have pomp and glory—not murdered secretaries and crushes on commoners.
Nothing gets the tongues of London’s high society wagging like a good scandal. And when the personal secretary of the visiting Prince Sebastian of Alucia is found murdered, it’s all anyone can talk about, including Eliza Tricklebank. Her unapologetic gossip gazette has benefited from an anonymous tip about the crime, prompting Sebastian to take an interest in playing detective—and an even greater interest in Eliza.
With a trade deal on the line and mounting pressure to secure a noble bride, there’s nothing more salacious than a prince dallying with a commoner. Sebastian finds Eliza’s contrary manner as frustrating as it is seductive, but they’ll have to work together if they’re going to catch the culprit. And when things heat up behind closed doors, it’s the prince who’ll have to decide what comes first—his country or his heart./p>

Julia London is the New York Times and USA Today best-selling author of more than thirty romantic fiction novels. She is the author of the popular Cabot Sisters historical series, including The Trouble with Honor, The Devil Takes a Bride, and The Scoundrel and the Debutante. She is also the author of several contemporary romances, including Homecoming Ranch, Return to Homecoming Ranch and The Perfect Homecoming.
Julia is the recipient of the RT Bookclub Award for Best Historical Romance and a six-time finalist for the prestigious RITA award for excellence in romantic fiction.
She lives in Austin, Texas.

The door swung shut behind him.
Eliza and the masked man were alone.
He tilted his head just slightly to the left, as if he was uncertain what he’d just found. She returned his gaze with a curious one of her own. His presence was so large and the passageway so small that she felt a bit as if she was pressed up against the wall. But thanks to the rum, she was feeling rather sparkly and untroubled and, with the help of the wall, managed to curtsy with a slight lean to the right and said, “How do you do?”
The Alucian didn’t answer.
She supposed it was possible he didn’t speak English. Or perhaps he was shy. If he was painfully shy, he deserved her compassion. She’d had a friend who had suffered terrible stomach pains for days when she was forced to be in society. She was married now, with six children. Apparently, she wasn’t shy away from society.
Eliza held up her glass, making it tick-tock like a clock pendulum. “Have you tried the punch?”
He glanced at her glass.
“It’s delicious,” she proclaimed, and drank more of it. Perhaps as much as half of it. And then chuckled at her indelicacy. She’d forgotten most of what she knew about polite society, but she was fairly certain guzzling was frowned upon. “I hadn’t realized I was quite so parched.”
He stood mutely.
“It must be the language,” she murmured to herself. “Do you,” she said, enunciating very clearly and gesturing to her mouth, “speak English?”
“Of course.”
“Oh.” Well. She could not guess what would cause a gentleman not to speak at all if he understood what was being said to him, but frankly, Eliza was more concerned with the whereabouts of the footman than the Alucian stranger. “Are you going through?” she asked, gesturing to the ballroom door.
“Not as yet.”
The clean-shaven, tall man with the thick tobacco-colored hair and the pristine neckcloth had a lovely accent. She thought it sounded like a cross between French and something else. Spanish, perhaps? No, something else. “How do you find London?” Not that she cared, but it seemed odd to be looking at a gentleman when there were only the two of you in the passageway and not at least attempt to make polite conversation.
“Very well, thank you.”
The door behind him swung open and very nearly hit the gentleman on the backside. The footman squeezed inside. “Pardon,” he said, bowing deferentially before the Alucian gentleman. Eliza thought it curious the footman didn’t offer the Alucian the punch but walked past him to take Eliza’s glass and offer her another. “Oh dear. I really shouldn’t.” But she did.