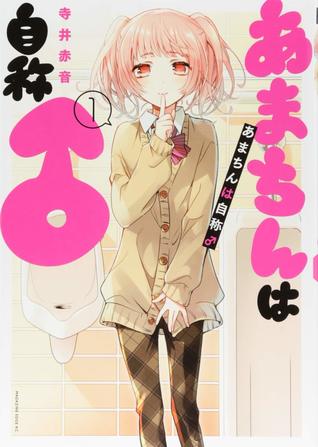 Meet Ama-chin a very cute girl? Boy? Either way they are freaking cute, confusing the masses of people around them.

I have been meaning to read this one for ages and finally I had a chance. I fell in love with the cover, but the blurb also pulled me in. It sounded adorable and hilarious.

It is about a boy, who looks and acts very feminine, named Ama-chin (full name Amasawa Kokoro). It is the first day at a new school/high school and I had such a laugh at his introduction and the reaction of all the boys in the class. They all fell head over heels with Ama-chin and then were shocked when he confessed the truth. Oh but they did recover which I found hilarious. But too bad for them, Ama-chin has zero interest in any of the guys. Well… with the exception of her one childhood friend: Tatsumi. Ama-chin LOVES Tatsumi. 😛

Tatsumi is such a good guy, I loved his speech in the classroom in the first chapter: “Like I said. We’ll be together for a long time, regardless of if you’re a guy or a girl, anything is fine… to me no matter what, Ama-chin is Ama-chin.” Aww! And even later on he protects Ama-chin, helps him out, and more. I was chuckling and happy with all the things he did. Yes, he didn’t have it easy at times as Ama-chin is quite… extravagant (and says some dirty things), but he still keeps doing it.
I also loved that he could draw and really well even!

Throughout the volume we see people get confused about Ama-chin, but he is also conquering the hearts of everyone he meets. Including the class president who wasn’t a fan of Ama-chin the beginning (for various reasons including that she can’t handle dirty talk).

I loved when we met Ama-chin mom. I can see where the extravagant attitude comes from. 😛 I do want to wear all those cool fashions though, they are all right for me! wishes she could step into the manga to take (and of course pay) for those dresses and clothes

The last chapter, oh my. Poor Ama-chin. He is really attached to Tatsumi!

I had a laugh that all chapters ended with Ama-chin proclaiming that he was hard (always for Tatsumi). It was just hilarious.

The art was just fabulous. I love the character designs, especially Ama-chin is just the cutest and best.

All in all, I need more of this hilarious and cute manga. I want more Ama-chin and see what other people he confuses. 😛