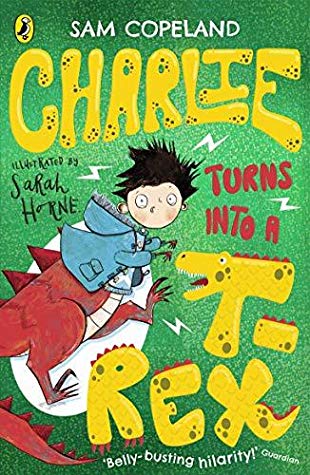 “Polar-Charlie reared up on his hind legs and roared in fright.
This did not help matters – quite the opposite, in fact. From Mrs Shufflebottom and the children’s perspective, a polar bear was now standing in front of them, rearing up to its full heigh and roaring at them at the top of his lungs.”

The second book about Charlie and his animal transforming skills. But of course there is also trouble ahead, this time it isn’t going well with Charlie’s family. Something of his dad was stolen by the father of the annoying classmate of Charlie named Dylan. Which means that it isn’t going well and that they will have to sell the house. You can imagine that this causes tons and tons of stress for Charlie which in turn causes him to transform a lot. I did feel sorry for Charlie. Finally things were looking on the bright side, his brother is better again, it is almost Christmas, he has a ton of friends who care about him and are there for him. And then this happens. 🙁

I knew right away that what Charlie heard maybe not the right thing. I don’t think this is a spoiler as I think most can guess it from early on (especially when we learn what dad’s job is). But still I had fun seeing Charlie and his friends try everything they could to help out his family. I had quite a laugh at their plans and seeing what they wanted to do.

They are trying to help out Charlie with his powers, however… we do quickly find out that the powers that Charlie have are a bit heavier than might be expected. He is losing his mind when he is the animal (which reminds me of what the Witches in Discworld always warned for as something that would happen if you go into an animal’s mind). But with his friends or family around he can become Charlie again. I found it quite exciting but also sad that this was happening. In the beginning it seemed that things were going OK, but then we see this happening. I hope Charlie is able to control his powers and maybe get more control over the whole losing his mind as well. Because his friends can’t always be around.

I am rating this book a bit lower than the previous book for two reasons. One: Once again the animal on the cover or title doesn’t make an appearance. Once was fun, twice is annoying. As I am kind of reading to see those happen. I get it is part of the appeal or something, you know the letters and such, but still…
And two, Dylan. I wasn’t a fan of him in the first place, but he is getting more and more weird and manic with each chapter. Come on dude, this isn’t a freaking James Bond movie, get over yourself and stop being such a bully. You are only causing pain and stress, and please just go away.

I loved seeing what kind of animals Charlie turned into this time. Poor goldfish Charlie though. 😛

Oh, and like the previous book we get some notes and letters and interventions by the author. Which I quite loved for most of the times.

The illustrations are once again fabulous and made the book even better!

All in all, I can’t wait for the next book! I want it now!