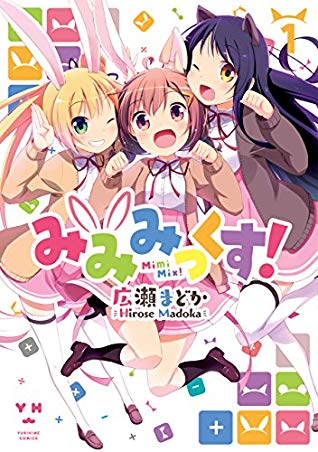 In a world where having animal ears is trendy and available what will you do if you find out you are allergic to the ears?

It’s been almost 2 weeks since I read this one and I finally felt enough inspiration to write a longer review!

This was just way too adorable. A world where you can have REAL animal ears including random traits that fit with the animal you have. For instant one of the girls has tanuki ears and she loves sleeping and eating. Tons and tons of eating. I was quite interested to see all the various traits that come with the ears. Oh, and apparently the ears are real. Not just mechanical, but real. I don’t even want to know how it all works, how they get sewn stuck on the head, and all that. I will just ignore it as I am sure it is pretty gruesome. 😛

Meet Nono-chan, a girl who loves Neon (a girl with bunny ears). She desperately wants rabbit ears as she has read a fortune that states that one can have a good love life if they both have the same ears. However… Nono quickly finds out that instead of a pink result, she gets blue/black… meaning she gets allergic. Her first attempt ends in almost doing very lewd things with the girl she loves (yay for bunnies and their libido). We also see how Neon and her ears work, instead of libido she is shy and tends to run away (just like bunnies also do).

The manga is adorable, though I also feel sad for Nono that she can’t have the ears yet. Yes, there are baby steps, but my heart just hurts for her. She wants them so badly, she wants them so so much, she sees her friends and classmates be happy with them. I can imagine how it must feel. But I hope that as the manga continues she will get bigger ears, there will be a cure. Or maybe she will learn to be happy with what she has? Though I am just hoping for ears. 😛

The art is just superadorable (well with the exception of Mikan’s dad, he is just creepy as hell). I loved how the girls were drawn, I loved seeing the ears.

All in all, a really cute manga with shoujo-ai elements, and yes I will be rooting for Neon x Nono. I hope they get together. I would recommend it if you are looking for something fluffy and fun.