Hohoho and welcome to the Book Blitz for Home for Christmas by Ann Grech. This is a book I so want to read as it sounds absolutely adorable, plus I am much in the mood for some m/m romance (though just like the cover reveal yesterday, the stepbrother… eh). So I am happy I can be part of the Blitz.

For today’s post I got an excerpt from the book, a couple of teasers, a giveaway (yes, open INT), and book/author information! Yes, there is a ton~ 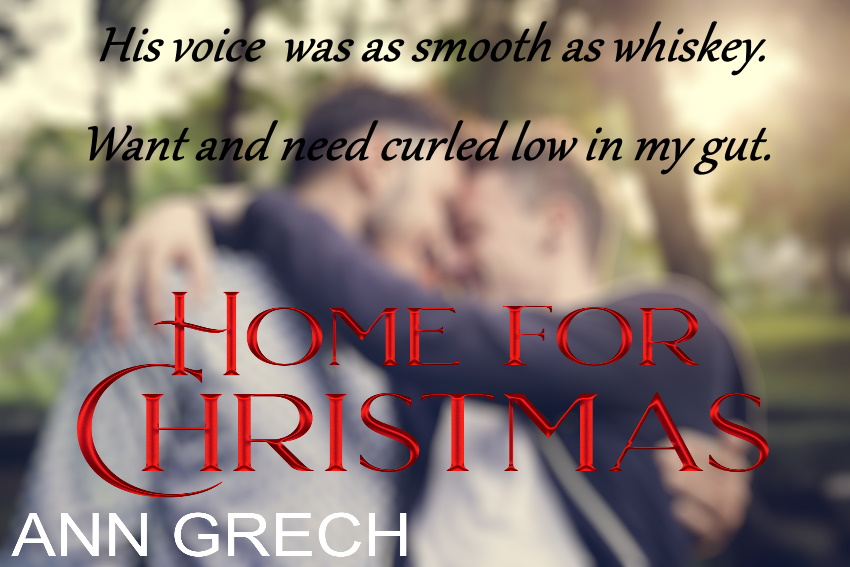 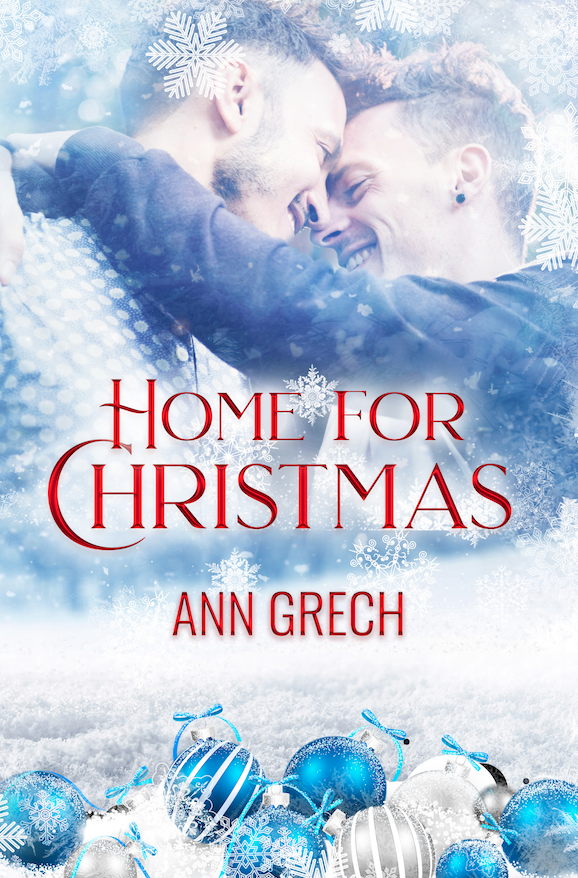 Fate threw him a wicked twist. Or maybe it was the magic of Christmas. Maybe it was just going home.

T’was the night before Christmas—three actually—and there was nothing quiet about the club Declan found himself at. The superhero-themed masquerade party was the one thing he’d been looking forward to when he’d been summoned home for Christmas. He usually kept a safe distance between him and his family. It was easier to hide his secret that way. Being gay wasn’t the only thing he was hiding. The truth was far worse—he’d fallen for his stepbrother, Ollie.

The night of the masquerade party saw his world was flipped upside down by an enticing stranger. He’d never be the same again. The two men came together when they both needed it most. What followed was one seriously sexy pre-Christmas set of fireworks exploding between them. But he was soon alone again, sitting in an apartment full of beautiful, rich people who only wanted to know him because of his stepfather’s bank account. Declan’s love of the holidays was wavering, and he was regretting his trip home.

Then Ollie walked in, and everything became a whole lot more complicated. Declan was torn—unable to get the sexy, nameless stranger out of his head and Ollie out of his heart.
Going home for Christmas would either break him or… well, Declan didn’t have that quite figured out.

Home For Christmas is a stand-alone, Christmas gay romance by Ann Grech featuring a steamy one night stand, a closeted hero, wrestling stepbrothers, numerous references to Woody and Buzz, singing in the shower and a feel good second chance romance. 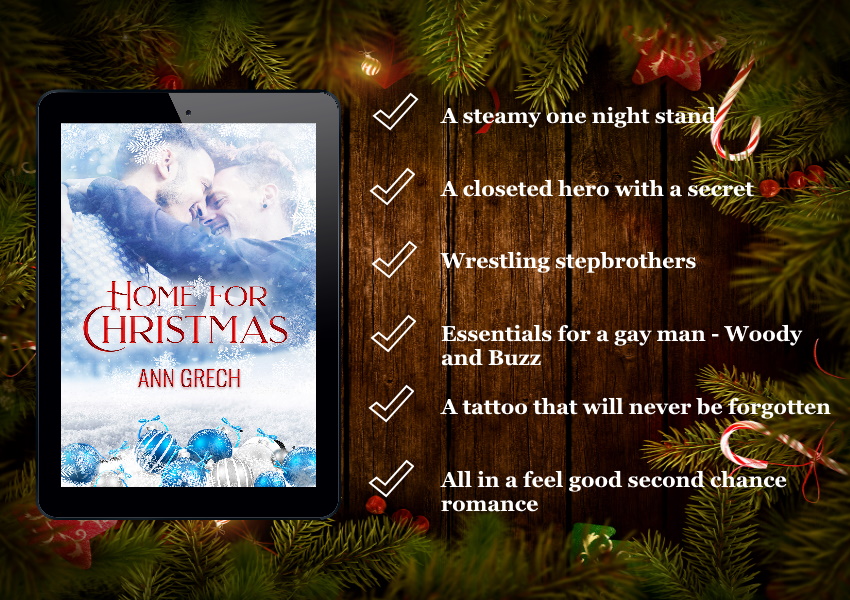 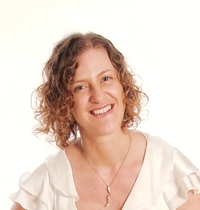 By day Ann Grech lives in the corporate world and can be found sitting behind a desk typing away at reports and papers or lecturing to a room full of students. She graduated with a PhD in 2016 and is now an over-qualified nerd. Glasses, briefcase, high heels and a pencil skirt, she’s got the librarian look nailed too. If only they knew! She swears like a sailor, so that’s got to be a hint. The other one was “the look” from her tattoo artist when she told him that she wanted her kids initials “B” and “J” tattooed on her foot. It took a second to register that it might be a bad idea.
She’s never entirely fit in and loves escaping into a book–whether it’s reading or writing one. But she’s found her tribe now and loves her MM book world family. She dislikes cooking, but loves eating, can’t figure out technology, but is addicted to it, and her guilty pleasure is Byron Bay Cookies. Oh and shoes. And lingerie. And maybe handbags too. Well, if we’re being honest, we’d probably have to add her library too given the state of her credit card every month (what can she say, she’s a bookworm at heart)!
She also publishes her raunchier short stories under her pen name, Olive Hiscock.
Ann loves chatting to people online, so if you’d like to keep up with what she’s got going on: 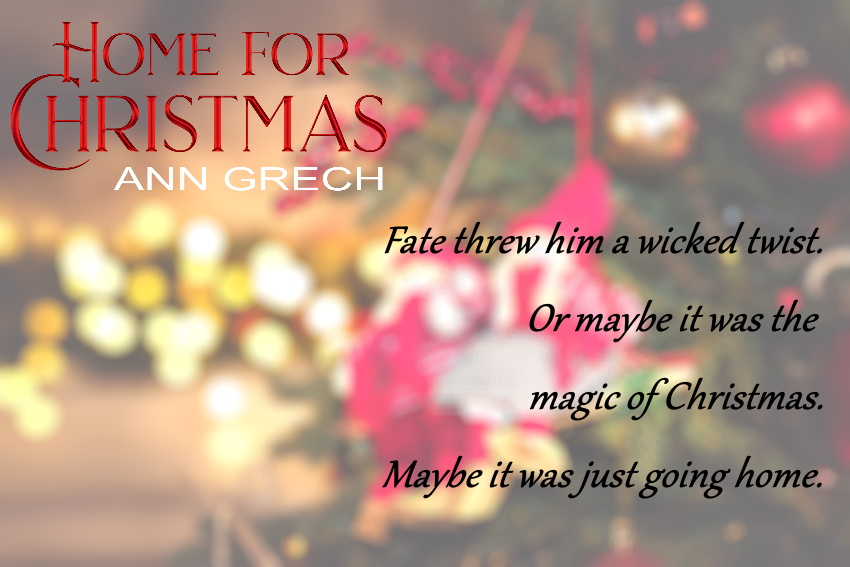 I tossed the shot back and enjoyed the burn of the whiskey as it traveled down my throat.
“Nice costume,” a warm voice said next to me. His words cut through the noise of the club and settled in my gut, spreading tingles throughout my body. That voice was as smooth as the whiskey I’d just drunk. I sucked in a breath, want and need curling low in my gut. The voice was familiar, like I’d heard him speak before. As if I’d listened to it for countless hours long ago, but that was wishful thinking. An impossibility. I turned sideways and faced…Batman. His three-quarter face mask and his beard hid his identity spectacularly, but as my eyes traveled down his body, I nearly choked on my tongue. Jesus, the man is beautiful.
His cape covered only the tops of his shoulders, and the smooth skin of his shirtless chest was on full display. He was lean with just enough muscle definition that it made my mouth water. He was the epitome of everything that turned me on. The perfect build. His nicely rounded pecs were tipped with flat nipples, the small nubs pointing at me in the dim light, and although he didn’t have the perfect six-pack, he did have the sexiest dips coming in from his hips. Cum gutters were cut off from my viewing pleasure by the dark jeans he wore. Damn, those jeans looked like they were tailor-made for him, fitting his hips and package perfectly and hugging his long legs.
“Damn, Batman, you’re lookin’ pretty fuckin’ hot yourself,” I drawled, my southern accent becoming more pronounced the more aroused I became.
He stilled, tilting his head to the side. “Have we met before?”
“Maybe? I don’t know.” I lifted one shoulder in a half shrug. “Does it matter?”
One side of his mouth turned up in a small grin, and he shook his head before grabbing my hand. That simple connection floored me. It was like lightning had struck me, setting every nerve ending on fire. Want and need slammed into me, stealing my breath. People say “sparks flew” and “instant chemistry” but I’d never experienced it before.
Until that moment.
And it hit him too if the slow lick of his lips gave me any indication.