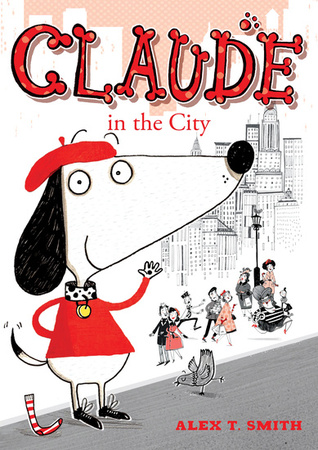 Meet Claude (or Jacques in my Dutch edition), he is a dog with an eye for fashion~

I read this book in Dutch but will be writing this review in English. However that means I will be using the Dutch names as I have no idea what the names (other than Claude) are in English.

Alex T. Smith writes some amazing books so when I spotted this book at my library I wanted to try it out. It looked adorable, though I wasn’t sure about the sock thing. In the end that was the one thing that didn’t make the book very enjoyable.

Meet Claude, or as I will call him since that is his name in the Dutch edition Jacques (no clue why it was changed from one French name to another). A dog who loves wearing berets and loves buying them. I do wonder how he buys things, so he can speak English? He has money somehow? I guess I shouldn’t think about that too much, just like with many of these animal books that are out in the world. I liked Jacques a lot. He was sweet and I loved that instead of waiting for his owners, Mr. and Mrs. Glimschoen, he goes out for some fun adventures of his own.

In this one he has two adventures both taking place in the city. Instead of your usual chapters the book is split in an introduction and then there are two parts which are two stories. In the first Jacques takes his friend out for a trip to the city and there is an exciting event happening at the museum, in the next his friend is ill and Jacques takes him to the doctor in the city. From the stories I liked the first one more. The second one focused a bit too much on that sock thing.

Yes, that sock thing. Mr. Wiebelsok. Who just looks like a sock, acts like a sock, but apparently can drink, eat, order stuff, have feelings, get an x-ray, and more. I think it would have been better had the sock actually looked alive. With eyes, hands/arms. As he is just kind of wobbling after Jacques??? No clue how? It just distracted a bit too much from the story for my liking. It was just weird. Weirder than a dog walking out on his own during day.

The illustrations were fabulous though! I also loved that there was a main colourscheme in this one (red, pink, white).

But will I continue this series? Sadly, no. There were good things about it, but I am just not into more of that sock thing.