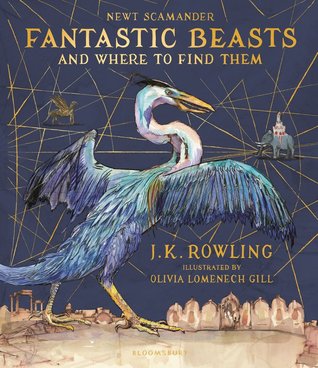 Find out where you can find magical creatures! And find out if you really want to see them or not (for instance some creatures are best left alone).

I am still in a giant HP mood, and this book was still on my list of books that I wanted to read. I have tried this book some time earlier this year or the previous, but I didn’t manage to read it far. But this time I finished it, and loved it, and want to read it again.

This book features an introduction by, who else, Newt Salamder. He is still a character I don’t know a lot of, no I haven’t watched the movies of Fantastic Beasts. I am still on the fence if I ever want to watch them, either way it will have to wait until ALL movies are out as I have heard there are going to be quite a few and it will take many many years. So I wasn’t that interested in reading his introduction. The next parts talk about various things regarding magical beings and such, I didn’t really read those as they were pretty vivid in my mind. I guess from my previous read of this book or that I read it somewhere else. I just can’t remember.

But after that the fun starts! We read about many many magic beasts (and no beasts) that can be found, or could be found in the wild. Some creatures get a long part, some just get a piece. I didn’t mind it though, some creatures were just quite boring and the ones that I liked or found interesting did get plenty. I was already delighted to see so many magical beings pop up, and I had quite a laugh on various things we as humans think about or know about that is the cause of a magical being (like grain circles).

Plus, I liked that muggles/humans were talked about and how they often they did see the creatures and that at times the wizards did something about it, and sometimes not. Especially in the past it wasn’t as big as a problem now. These days they just wipe your memory, or try to make up a story about something else to distract.

I think I would have liked to see a different scale of rating than creatures having a number of x’s under their name. Maybe skulls? Or something else that stands out a bit more, as I can tell you at times I just didn’t see the x’s.

I also wasn’t that interested in the footnotes that were placed on various places. I tried reading them once, but found them not that interesting and decided to just pour over the rest. Because there is enough to see and read without those.

I had tons of fun reading this one and the illustrations are just GORGEOUS. Yes, this needs to be in caps. The illustrations were actually the main reason why I picked up this book (the other reason being HP stuff). This illustrator has a way with illustrations, really, it is magical. The creatures seem to come to life right before your eyes.

All in all, I could probably talk more and more about this book, but I will end my review here. I will just say this: Read it! If you are a lover of all things Harry Potter or if you want to know more about magical creatures.