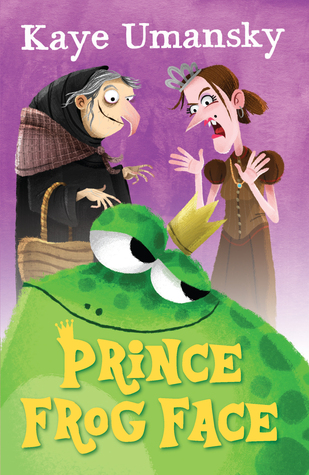 A fun book about an annoying prince who gets the life lesson of the century.

I read this book in Dutch but want to write a review in English. However this means I will be using the Dutch names as I have no clue about most of the English names. So please, don’t comment telling me the names are wrong. 😛

This book is about a prince named Valentijn van Romantikus. He has a wonderful last name, but believe me this boy has a lot to learn about romance. He is looking for a girlfriend but doing it in such a way that I actually felt sorry for the princesses visiting him. He gave them points, based on silly things like shoes and hair but also just by asking one (or ten) questions he gave them points and dismissed them based on that. You can imagine that this is not how you treat a lady, and so it is high time for someone to teach him a lesson. Thankfully, and magically, there is a trespasser at the castle’s pond, a witch named Goochem who is NOT amused at the attitude she gets from the prince (though then again, woman you are trespassing) and also not by his attitude against the sweet ladies. When he just laugh she turns him into a frog (with a tiny little crown) and so the prince life lesson starts in a very hilarious way.

I had such a laugh at the distress the prince went through when he found out he was a frog.. and stuck in a well with 3 toads (all dressed up to the nines which I loved btw). Yes, it is probably mean of me to laugh, but come on all the pages so far the prince has been a snob, an egotistical meanie, and rude rude rude. He deserves to be bumped down a notch. The prince shows smarts and bravery though when he decides to find a way out. Though I wonder if he really wanted a way out given that he meets someone who is even ruder, meaner and more horrible than him, Eugenie, the princess of the next kingdom. Good lord, I was SO not a fan of the girl. I don’t mind a not-so-standard princess, but this girl was just horrendous. Violence was OK, lying totally tip-top, being mean and rude were her game. Sorry, I just wanted her away. Sadly, she was needed for the story, because our prince does need a big wake-up call.

The ending and what happened there were totally great, good job Goochem and I was so proud of our prince. I think he is learning. Or well I hope so and I hope he will keep up the good and sweet personality for a long long time (even if the witch isn’t around).

The art was also fabulous, the style was quite fun!

Oh, and I am loving that this one was done in dyslexia font so that those kids can also read this book.

All in all, despite the horrible prince and princess, I had a lot of fun reading this book. It was a classical tale with a new twist and a wonderful life lesson to be learned.