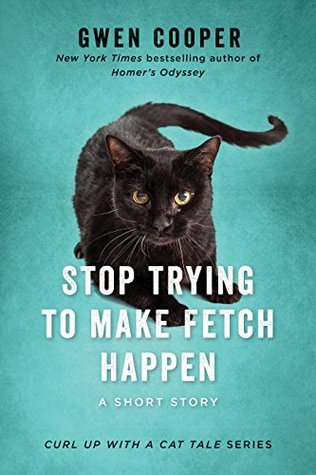 Another cute short story about this author’s cats!

After that previous book not being a success I was naturally a bit hesitant about reading the next books on my Kindle. But I was in the mood for something funny, something cute, something with cats so I decided to read this one. Plus points to the funny title!

This one is all about the fluffball named Clayton. We met him in another story about his sister (cat friend) Fanny. I am so delighted that we get more of Clayton this time (and a tiny bit about Fanny as well). And boy oh boy, this was a delight to read. We read about all things Clayton. How he loves fetch to the point of that you just want to lock the door and hide. That despite three legs he is fast and hops around adorably. That he loves his humans (or well anyone who gives him attention as he also loves the vet despite the shots he gets) A LOT. I already liked Clayton from Fanny’s story but seeing him get the spotlight and learn so much about him, I can say I would love a cat like Clayton. Now if only I could get rid of the whole cat allergy thing that I got. 😐

On the topic of animals being doofuses (??) and not always learning from their mistakes, I could only nod along. My dwarf hamsters have some strange things they do despite knowing that it is a bad idea, or at least, as a human I would think that falling from the highest shelf is a bad idea.. however my hamsters keep being lemmings. 😛 I am glad to see other animals also just going on without even thinking about the previous times. As for the teeth thing, my only remaining dwarf hamster hates the vet so much that she rather wrecks her own teeth than have him cut them… Yes, I try to put stuff in front of the bars in her cage.. but she finds a way. You would think it is a bad idea for her, but no.

I love the last pages of this book, they were really sweet and heartwarming.

All in all, I had so much fun reading about Clayton, about fetch, about his weird things, and about the love this author has for her cats! There is so much love.