Happy Sunday all and welcome to the Book Blitz for Lock and Key by Evangeline Anderson. Oh boy, I am so happy I can be part of the blitz as the book sounds just too awesome. Vampires, danger, other magical folk, a magical school, and more.

For today’s blitz I got an excerpt from the book, you can join a giveaway (open INT, so go go), and of course I got book + author information.

Let’s get this blitz started. does a dance 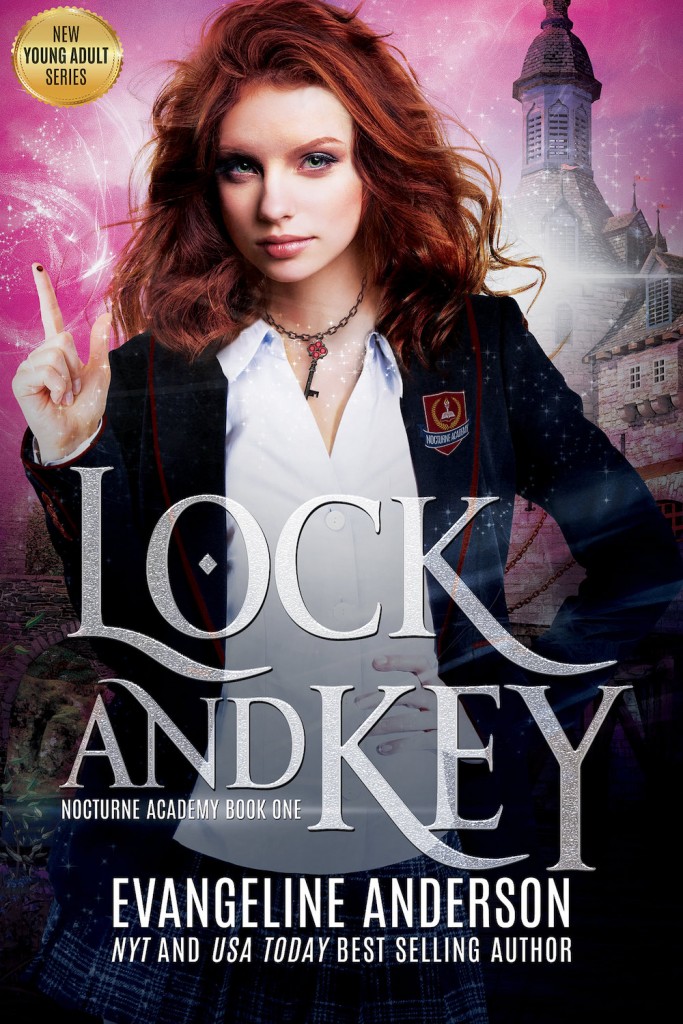 What do a mysterious necklace, forbidden Blood Magic rituals, and a sarcastic Nocturne boy with the face of a fallen angel all have in common?
Me, apparently.
Since I started school at Nocturne Academy, strange happenings have befallen me. The weird key-shaped necklace I found at a flea market chokes me every time I try to take it off. Also, a tall, beautiful, and bitingly sarcastic Nocturne has the lock that matches it.
His name is Griffin Darkheart, and—like this freaking necklace—I can’t seem to stay away from him, though he’s being Censured for mysterious crimes. Among a student body composed of vampires, witches, were-dragons, and fairies, I no longer know what my future holds.
To heck with graduating with honors. I’m just hoping to graduate alive. Nocturne Academy is full of deadly dangers.
And I’ve already got a target on my back…

A warm breath of humid Florida night air breathed through the hallway like the exhalation from a giant mouth. On it, I caught the scent of orange trees mixed with the flat, wet scent of the lake that surrounded the castle.
And running through it all was Griffin’s own scent—a cold, clean, somehow completely masculine aroma that flooded my senses and made the key around my neck throb even harder.
Stop him! it seemed to be crying—I swore I could almost hear its voice in my mind. Stop him—he’s getting away!
Maybe that was what made me speak—what made me call out to him, though every instinct I had told me I should stay silent and let him pass. Griffin was a predator—seeing him in the darkness like this, I knew it to my bones. He was a killer and his kind preyed on mine. I had the feeling of a rabbit calling back a hawk that had wheeled by overhead or an antelope calling out to a lion.
But still I spoke.
“You’re wrong, you know,” I called to his back, when he was already halfway out the door.
Griffin turned, his eyes gleaming silver in the dim moonlight spilling in through the half open door. He seemed to deliberate for a moment—almost to struggle with himself—and then he let the door close and came striding back to stand in front of me, even closer than before.
“Wrong about what, little witch?” he murmured in that cool, silky voice of his. The voice a snake might use before it struck.
“I…I’m not a witch,” I told him, lifting my chin and meeting his eyes, though he radiated danger the way another male might radiate body heat.
“Oh no? Then what are you, Megan Latimer?” he drawled, putting emphasis on my last name.
“I’m just a Null,” I went on doggedly. “I can’t even light a candle with magic. I don’t have any magic—I don’t belong here.”
“Yet, here you are. Putting yourself in harm’s way. Why?”
He reached out and gently—oh so gently—stroked one long, cool finger down my hot cheek. The key jumped at his touch and so did my heart. I was beginning to feel like I couldn’t get a deep enough breath.
“I…I don’t know,” I whispered. And then—either daringly or stupidly added—“Are you the harm you’re talking about?”
“Maybe.”