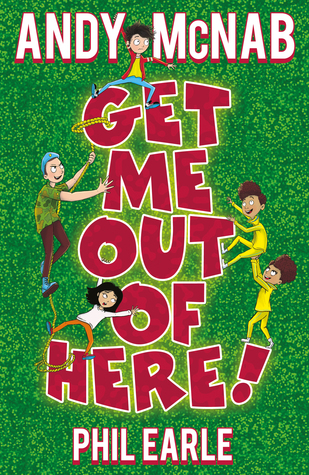 Danny is all excited for a Wild Extreme Park outing… but is he going to like it when his brother is coming with the trip? A fun and hilarious book about friendship, camping, and more.

I spotted this book at the library, one of the rare English books, and I knew I had to bring it with me, it sounded right up my alley. Plus, the illustrations were just so fabulous.

It is the chance of the lifetime for Danny when his class gets a chance to go to a fun outing, something with all sorts of wild extreme things. Danny is eager because he has been trying (and not doing too well sadly) to do parkour and climbing walls and the like. I did feel sorry for him that his mother was having so much trouble with getting enough money for her kids and food and the like. But she is able to pay a bit… if, and I loved this idea because more parents should do this, Danny could get some of the money himself. Well. I am not too sure if mom will be too happy with Danny’s plans for money, I was in stitches. But I did think it was awesome that he tried and that he was pretty creative with them (OK, it made things worse, but hey, he tried).

I did think it was superhilarious that these kids didn’t know where there stuff came from. HOW? How did they confuse a cow with a rhino? They must have read picture books or seen shows or seen the occasional commercial pop up with cows and all that.
How did they not know where milk, meat and eggs came from?
I get these are city kids. But I am one myself and dang it I knew clearly where my stuff came from (I still remember the shock when I was little and learned where eggs came from, ewww still disgusts me to today), and I knew what the animals are. Is this is a generation gap? I am already that old? 😛
It was quite funny, especially seeing one of their classmates just continually make some really dumb remarks that had everyone, including me, in stitches. How did he get to these conclusions?

Thankfully Danny does know a lot and I was just delighted that he was often the one with the most sense.

I loved seeing the kids find out all about nature and that they had to make their own houses (tents in this case which had me in stitches as Danny and his team made everything… but a tent), get their own breakfast, and then of course there were all the fun extreme sports. I loved those as well and, despite having a fear of heights, would love to try them out.

I also loved the ending, oh boy that one was so exciting I totally lost myself further in the book. I just had to know if everything would end up well (I was guessing yes due to the nature of the book, but you never know). While I wasn’t approving of what happened on the bus, I have to confess that yes I giggled.

As I said at the start I loved the illustrations. They were fabulous and so much fun. They really brought the book further to life. Making the events either more hilarious or more sad (nettles don’t make anyone very happy, especially not when applied to bums).

Oh, and I am loving it when the title pops back in the book. This time it happened quite a few times. 😛

I hope that if I am as old as Gerri that I am as kick-ass as she is. Dang that lady. Sure, her attitude needs working. You are here with kids, not soldiers. But other than that that she can do all this at her age is amazing. Gosh!

I am sadly rating this fun book less due to two things:
1) Dylan. I understand that brothers and sisters will bicker. I understand that at times they will do things that aren’t nice. But what Dylan does is just psychopathic and wrong. Given nettles to someone on the toilet when they ask for leaves? Harmful. But it only escalates as the story continues and I wonder why no one did anything. The only thing the teachers/leader did, was the same that happened to me when I was bullied, telling Danny to avoid the guy. WHAT THE Hell? That never works. As it is NOT ME nor Danny in this case who are looking for the bullies. The bullies come to us at the most rotten moments, at the moments when you cannot run, at moments when you are alone and cornered. I hate it when teachers say this and I also hate that they gave Danny so much blame while he wasn’t the one doing anything wrong. 😐
2) The Giraffe jokes. There is a guy in Danny’s class, coincidentally one of his friends (no clue why because if my friend kept calling me Giraffles and made jokes like this I would stay away from them). I just found it very hurtful.

Despite those 2 meh points, I had tons of fun reading this book. I would recommend it.