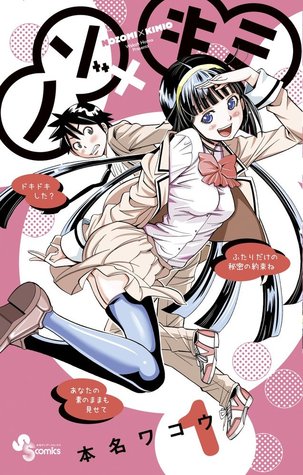 A hilarious ecchi manga in which our MC has to make a promise with a girl after she catches him peeking in the girls changing room.

Currently sick again with flu (urgghh) so I was in the need for something funny, something silly. And this one has all of that, but also drama, tons of ecchiness, and some character growth.

One fateful day our MC gets locked in the girls locker after seeing his friends go through the girls stuff. He intervenes and gets locked up. He decides to hide as the girls are coming. But he didn’t pick the right locker (or did he?). The locker opens up and there is Nozomi. She is startled, but she is also keeping silent. And later we find out why. The girl finally felt some dokidoki excitement, something she never felt before. Instead of talking to the guy normally she decides to blackmail him. She wants to keep these feelings and explore them further… by showing each other their bodies. Or well, it is just Nozomi who shows her body, I haven’t seen Kimio do much more than open his curtains (they are living in the same apartment building and can look into each other’s rooms) and bleed to death or feel embarrassed by this sexy girl showing her goods. 😛 Given the premise I had expected that both would do it, but it is really just Nozomi. I did think it was quite daring of her to do so, and while I am not one to totally agree with the method to keep excitement levels high, I did think it was also funny that this was the one way she could think of. Oh he saw my body when I was changing in the locker room, this means that I need to strip to get that excitement. Logics.

I must say I was at first not that happy with our MC. He was your typical wussy MC. Running away at the sight of anything that is a girl. Sure, I was kind of happy that he was at least not doing what we see in some manga, the guy immediately groping the girl when she does the things Nozomi does in this one, but running away constantly just got tiring. I understand that it is a bit stressful to have a girl flash her boobs at you, show her panties at you. 😛 But man up. Just let her tell the whole world you were peeking, who cares, you probably aren’t the first guy in the manga world (given how common it is). 😛 Later though he did get a bit more tough and I was just cheering during that part with the cheerleader and him hiding. What he did for Nozomi was just amazing and I am just hoping this will mean them getting closer… and maybe dating.

We also meet two other girls. One of them, named Yuuki Makino has trouble with her big breasts and enlists Nozomi and Kimio to help her out. While their methods were a bit unorthodox, well. You will just have to read to find out what happens.
The other is Michiru and she is your typical (at least by reading US YA and manga) cheerleader. Wants to popular. Is a total bitch. Feels threatened when someone gets close to popularity. I didn’t like her from the start. Even before the whole drama and bullying started I just had a hunch this girl would be a bitch. And I was right. I do have a feeling we will see her later on, and I am not looking forward to it. 😐

As you can imagine this one is pretty ecchi, but I still had tons of fun reading it as it was funny as well. Plus seeing the characters grow (Kimio getting more confident and stronger and Nozomi less emotionless and more confident and happy) makes me happy. Sometimes a manga just focuses on the ecchiness, but here character growth is important as well.

The art. Well, the anatomy at times is a bit terrible. Boobs don’t work that way for instance, you cannot turn your head so many degrees to say hi to someone, and I could go on.