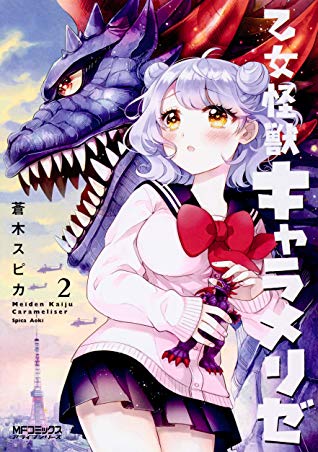 The second book in this hilarious and gorgeously drawn series! This time theme parks and dates, a metal festival… and more!

It has been a while since I last read the first volume, I am not even sure why it took me so long to read this volume as I had so much fun reading the first one. Probably other books that just popped up that wanted me more. 🙂

In this one we have a wonderful date between Minami and Kurou. I just love these two together and I was delighted that he had the guts to ask her out on a date and even to a park like that. OMG, I would love it if someone had asked me out on a first date like that. dreams and swoons I am so happy that there was tons of development between these two, I have read WAY too many manga were it takes a couple ages and ages before they finally get to anything and then there is this manga with a lot of development in just ONE volume. Yes!

I was a bit frustrated with Kuro. I could understand things were exciting for her, and I also know the feeling of being on a date with a wonderful guy, I do think if she would just calm down a bit and stop being so frazzled all the time maybe she would be better at handling her kaijuu side. Don’t get me wrong, I understand that she has a hard time controlling her kaijuu, but with how she is acting in this one I could see why it would pop up all the time. She is way too frazzled. Way too worried. Way too concerned. Given Minami… I am sure he wouldn’t mind it if she was just honest.

I loved seeing a new character pop up, namely Kotaro. A scientist dude who loves and supports Kuro’s metal music love and in one chapter takes her to a festival at which her favourite band is playing. I am very much curious about the adventures that Kuro’s mom and Kotaro had in the past and if they dated back then (probably yes). I wouldn’t mind a spin-off of this manga with these two characters.

I was shaking my head at the stuff that happened at the metal festival, and with that I mean the fact that Minami is also around there and that he sees how Kuro and Kotaro are acting around each other (very familiar and the likes). Jealousy reigns and more confusion happens. I was just rolling my eyes that this was needed. It just seemed silly.

But I guess it was needed to have her change to kaijuu again and to have a good lead-up to the last parts of the last chapter in this volume. And dang, I just loved those pages! They were ones I was looking forward to and were I was squealing like a fangirl. Finally!

I do wonder how much Minami really knows. There were just so many instances were he SHOULD know something is up. 1) Our Kaijuu is always around him 2) She looks with eyes of love and he has stated they look like the eyes of Kuro 3) that last part of the volume.. how can he not know? I hope that in the next volumes this is addressed.

The art is still superduper gorgeous, I am just so so in love with it. I love the eyes, the outfits, the character designs, even the kaijuu is wonderfully drawn .

Oh, oh and I liked Manatsu and how she always seem to pop up when her dear lovely Kaijuu was around. 😛 I guess money makes dreams come true.

All in all, I can’t wait for the next volumes and see how things continue. I would recommend this manga to everyone in need for something cute, something funny, and something with a big giant kaijuu.