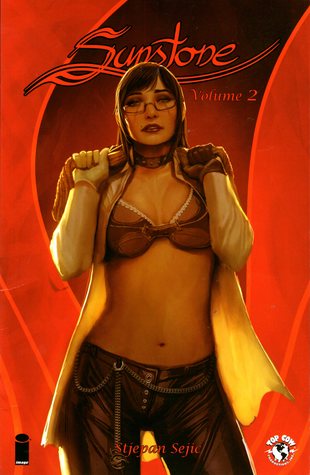 The second volume and this time less sexy times and more and more backstory. Which I loved, but still I wouldn’t mind even more sexy times.

After reading the first volume and falling head over heels with this couple, the art, and the story, I just had to continue reading to see if Ally and Lisa would stay together (given that we see them x years after I am going with a full YES) and if they would have the talk. As both of them seem to like each other more than the other is thinking. Plus, I hoped for more sexy times. I am still quite new to the BDSM stuff, so at times it was a bit too much (for me), but I also loved it.

In this one we see more Ally and Lisa, who find some new ways to have sexy times while not being able to do much (as Lisa is on her period, I so understood her bother when it came to visit). We see them grow much closer and getting more lovey-dovey.

We learn of various new things, a whole lot of backstory that features mostly Ally. We learn about her relationship with Alan, we see that two doms didn’t work out as the one always tried to overdo what the other did. I am so happy that despite their break-up in college, despite that it ended like this, that they are now best friends.
And we also learn of Marion, the ex of Alan. What happened to her and why Ally feels oh so guilty. Though she shouldn’t. No one blames her. No one. As Lisa said when Ally confided in her, some people don’t have common sense. 😐 I hope that Ally can find some more confidence in Lisa and see that she is not like Marion. Yes, she is a sub, but she will never go so far til it hurts or til it’s too far.

We also see the club that we have heard about. And oh my goodness. We see several very interesting performances that will probably stun you (unless you are used to it) but will also delight.

The art is just amazing! As I said in the previous volume’s review I am just a big big fan of the art in this one, and even have it on my phone as lock and normal wallpaper. heart eyes

While I am not THAT interested in all the other characters (with the exception of Alan), I am still happy we met so many new people. I do hope that the next volumes mostly will be about Lisa and Ally though and feature tons of new sexy times.