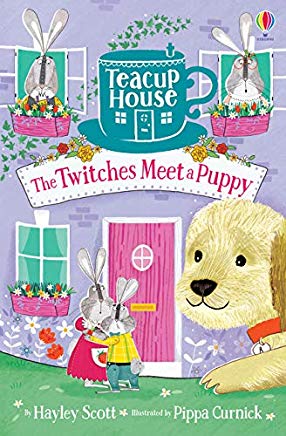 The Twitches are back and about to meet a very happy pupper.

So apparently this is book 3… whoops. I saw a new book at one of my libraries and was delighted that they added a new book in the series to their collection (since it is an English book and sometimes series never get more than the first book). However… I came home and started reading to find out I missed a whole book. Just checked the library’s site… and once again they screwed up and don’t have all books in the series. I am kind of thinking of going to them and tell them, but on the other hand I haven’t seen any of the books ever being added that I mentioned, so there are tons of incomplete or wrongly bought series. sighs

On to the book. The Twitches and Stevie are back and I was just so happy to see them again. This time the Twitches are going to have a lot of adventures as Stevie’s dad and husband bring along a cute little puppy named Rio who is very very eager and delighted. I can just imagine the horror for those little bunnies, and then especially Silver and Mom as those two were left behind while Dad and Fig were put in the pockets of Stevie and Eshe and went rollerskating. 😛
I loved seeing so many POVs. We got Stevie’s, we got Silver and Mom who are on an adventure and even do some awesome rescuing, and we got Fig and Dad who are trying not to bounce too much in those pockets.

I was pretty heartbroken for Stevie when we saw the Teapot house turned over, two bunnies missing, and various stuff strewn all around. Poor Stevie. That house and the bunnies are everything to her and I could so understand the hurt seeing it toppled and messed up.

I did had a laugh that The Twitches who were all we should be in the same spot and not do anything because the humans won’t understand/be confused/etc. actually did a lot of things in this one that may have them be even closer watched. They cleaned the house, they magically got back to the house, and then there is something else.

I do hope that Stevie’s dad and his husband keep a closer eye out on the puppy. Because she really needs lots of training.

I loved that Stevie had found a new friend, I know in the first book when she just moved she wasn’t having the easiest time, so it makes me happy she found such a good friend. Though given the recap it seemed that it wasn’t an instant one. I wish I could read about it. Hopefully one day.

Of course the book is illustrated to the brim again and I am still a fan of the art. OK, the puppy wasn’t a favourite, but the rest was lovely.

I would recommend this one and I hope there will be more The Twitches books in the future.