Welcome to the Blog Tour for Watch Hollow: The Alchemist’s Shadow by Gregory Funaro! I am so happy I can be part of this tour as I was also part of the Nerd Blast for the first book last year.

For today’s post I got tons of things. You can watch a book trailer, read an excerpt, join a giveaway (open INT), and of course I also got information on the book/author. 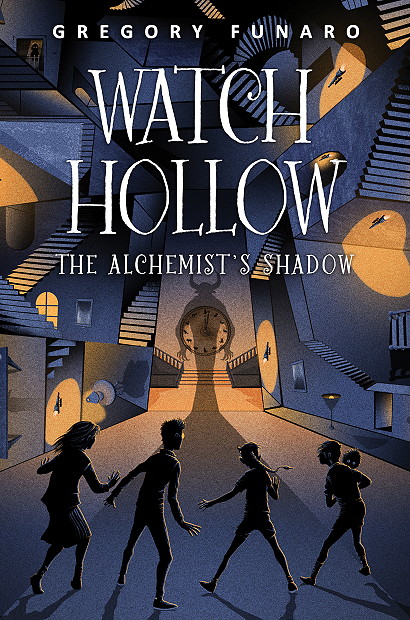 Having defeated the Garr, a vicious tree monster who lived within the enchanted woods of Watch Hollow, Lucy and Oliver Tinker now have the home they’ve always dreamed of: Blackford House. Powered by a magical clock and full of curious rooms and improbable knickknacks, Blackford House brims with the promise of new adventures.

Yet when a strange governess arrives from England—bringing with her the Kojima twins, Agatha and Algernon—the Tinker children’s once bright future quickly begins to dim. The Kojimas claim to be the rightful heirs to Blackford House, and soon after their arrival, a great evil enters the Tinkers’ new home, cursing it and turning it into an ever-changing labyrinth.

As a result, Lucy and Oliver, along with their clock animal friends, must now join forces with the twins to escape this labyrinth and save Blackford House, all while a new monster lurks around the corner.

Gregory Funaro grew up in Cranston, Rhode Island, and wrote his first story, The Ghost in the Window, in the fourth grade. He considers this to be his finest work, but unfortunately it has been lost to time. His first book for Disney-Hyperion, ALISTAIR GRIM’S ODDITORIUM (2015), was a New York Times best seller and an Amazon Best Book of the Month. His other works for children have received starred reviews from Kirkus, School Library Journal, and ALA Booklist. Check out WATCH HOLLOW, the first book in his series for HarperCollins, as well as its sequel, THE ALCHEMIST’S SHADOW, coming in 2020. Greg also teaches drama at East Carolina University, and is busy working on his next novel.

Lucy spun around and ran back upstairs. Ms. Graves was gone, she registered in one moment, and in the next, an explosion of red light from the mechanical room nearly blinded her. Springs boinged and gears clanked—something was wrong with the clock, Lucy realized with mounting horror. And Ms. Graves was inside!
Blinking floaters from her eyes, Lucy froze in the mechanical room doorway. Instead of Ms. Graves, the floaters dissolved around a ten-foot-tall monster. It had the head of a bull, the upper body of a human, and legs that were a combination of both!
Lucy nearly fainted with fright, and then the monster let loose a deafening roar and lunged for her. Lucy screamed and fell backward onto her bottom—but the mechanical room door was too small for the monster and it got stuck. Lucy tried to scramble away, but then the monster squeezed itself out and lunged for her again. Lucy threw up her arms to protect herself—she was sure she was a goner—when without warning, Meridian and the other animals leaped out of the clock!
Teeth gnashed and claws slashed as the clock animals swarmed the monster and drove it away from Lucy. The monster roared and tore the animals from its body, flinging
them squealing through the air.
“Don’t hurt them!” Lucy cried.
And then she was falling, tumbling backward down the stairs.