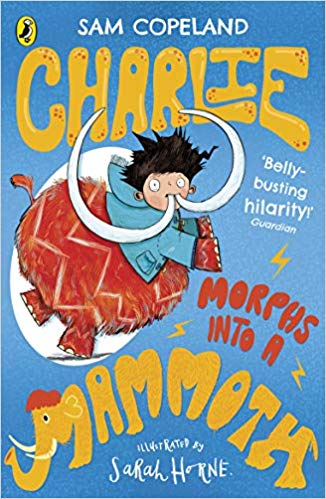 Will Charlie change into the animal specified on the cover this time? Or once again not? Also who is stealing all the animals?

The third book in the Charlie series and I loved it. It was funny, but also sad, had some realistic elements, I love the ability to change into animals though I wouldn’t be too fond of at times losing my mind and forgetting who I am (and then eating poop………….), there is friendship, fun references, the author at times pops up (and has a terrible attitude), and there is more. This book definitely didn’t bore me, instead I read it in one go (well in as much one go as I could).

In this one Charlie has more problems than just the divorce of his parents. Someone is stealing animals left and right and all the evidence points to multiple animals. What is Charlie’s skill again? Yes… Poor Charlie. I was looking forward to seeing how his friends and he would fix this mess and if they would find out who did it (though I knew it from the start :P). I had a bit of a laugh at the randomness of the stealing and also thought it was extremely silly that people at the zoo couldn’t see one bone from another.

There is also a dance, and with that two characters who get more spotlight in this book, Daisy and Lola. I am still not too sure how I felt about the girls. There constant Yes, No, regarding the dance got highly annoying. Make up your mind! But they proved to be quite valuable in things that our group was up to. I hope these girls will make another appearance in the next book.

Charlie’s life is really not the easiest. In the first book his brother was sick, in the second his parents were about to lose everything, and in this one his parents decide a divorce is best. Add to that the fact he can change into animals and has, for most of the book, not really much control of what he wants to be. If he thinks about penguins he changes into a chicken (yes, finally) and so on. Then there is Stupid Dylan who should just go to the moon and not come back. I felt so sad that he had to go through all of this. I am glad he had his friends who loved him and tried to help him.

BIG BIG Plus points to the reference to Jurassic Park. The one with the kitchen and the deadly penguins. I loved it and was giggling in delight while reading it. I read it aloud to my hubby and he was also approving. The illustration was a nice addition and made the scene and reference even better.

I did think it was weird that Charlie was the only one to apologise in the end and Dylan didn’t do any sorrys or excuses. Come on, I get you were hurt with what happened back then, but Charlie didn’t do it on purpose, tried many times to make it up to you which resulted in you hissy fitting and running away, of course the dude is giving up then. Sorry, if my friend did this I would have done the same. Eventually it is just over. Plus, I am not sure how I felt with another part of this ending… I won’t tell what as it is a spoiler and I am too lazy at the moment to use spoiler tags, but it just felt weird and in my eyes a bit forced..

I also thought it was a shame, then again I should have expected given it is apparently an annoying little gimmick, that we don’t really see Charlie morph into a Mammoth. I don’t count that last illustration, who is to say that that is Charlie? Given all the things that happen in this book for all we know mammoths could still be alive somewhere. 😛

The narrator stuff was fun, but did get a bit old, especially given the tone the author had. It was just a bit too much for me. Though I had a laugh at what Sarah Horne did, good job!

All in all, another delightful and fun book and I hope that we will be getting more Charlie books. I wonder what will be in store for him next, hopefully more happiness. I definitely don’t want this to be the end.