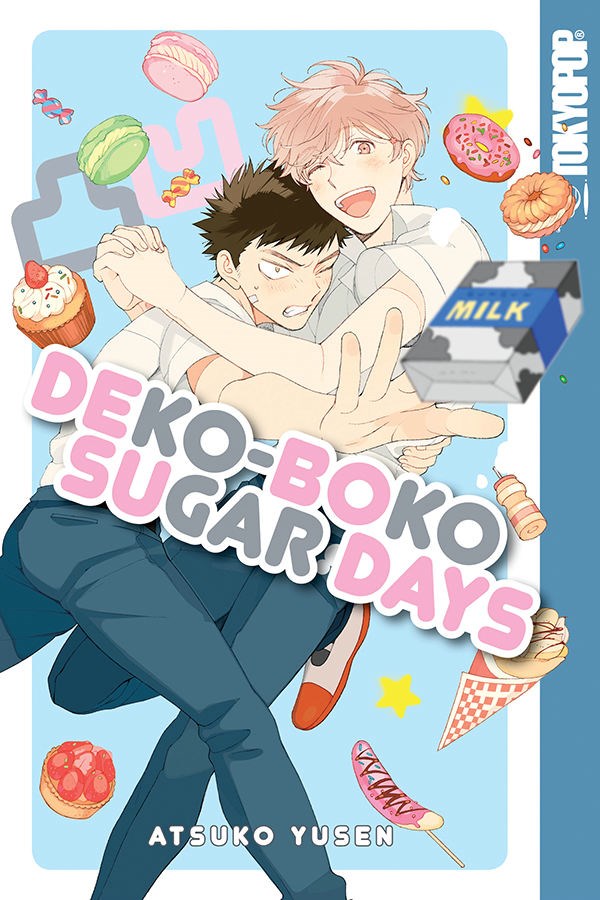 I was already in love with the cover and the blurb, but HOLY wow this book was adorable and the shipping level is way over 9000.

Meet Rui and Yuujirou. Two guys who are clearly in love, but both don’t know the other loves them back. Yep. It is that kind of story and I was just giggling and eagerly waiting for them to discover that their love/like was mutual. Sure, at times it was a bit frustrating and I just wanted to reach in the manga to grab both of them and push them together (you know, how kids used to push dolls together to have them kiss?). Especially since Yuujirou is trying to ignore his feelings (because he thinks that Rui has no interest in him) and doing that by pushing away Rui. You can imagine that there are some arguments and some confusion, especially Rui doesn’t get it. He just wants to be close to Yuujirou. And then when Yuujirou has a girl who is interested in him the confusion and the frustration just grows. Yep. It is getting fun!

I had a big big laugh at their friends/classmates reactions when they confessed to them about the love, without mentioning the name. These people instantly knew who they were talking about. Yeah, guys, you weren’t being sneaky about it, everyone was already wondering when you guys would just get to it. Get dating.

I am happy we also saw conversations between our MCs and their friends. Well, Rui’s friend also has an interest in him but Rui is totally oblivious. 😛

The confession scene? A bit cliché, but I was also laughing my butt of at how silly it was. And swooning at how cute and fluffy it was.

And after that a new chapter begins in Rui and Yuujirou’s life. Their relationship and the tons of sex they have. Teehee, yep. I loved that they didn’t rush it, but instead took it easy. Or maybe it was more that no matter what both of them tried things got in between.

I love the fact that Yuujirou and Rui had such a big length difference. Rui is 186 and Yuujirou is 165. That so reminds me of me and my husband. I am 166 and he is 199. So I could well understand how Yuujirou felt when he saw his cute, oh so cute, childhood friend who he had a crush on tower over him. 😛 I gave up on trying to gain length as my growth stopped when I was around 15/16, but Yuujirou is drinking all the milk just to hope for a few centimetres more (won’t work buddy, won’t work).

The art. OMG guys, I just flailing about the art, it is fabulous and gorgeous. I love the character designs and then later on when they get together and have sex, oh wow! It is just so shiny. I definitely need to check out what this mangaka has done other than this manga because I want more.

I want to talk more about this book, but I think everyone knows that I totally LOVED this book! I would highly recommend it if you are looking for a cute, fluffy and funny read with likeable characters, tons of shipping, and hot scenes.