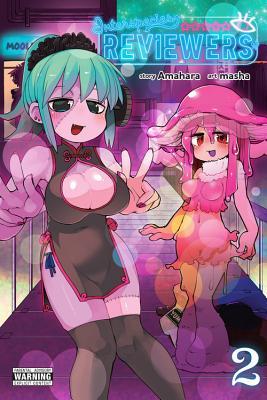 The boys (and Crim who is both a girl and a boy) are back for a new round of sexy reviews.

Back to the manga, in this one the guy review… let’s see which ones were my favourite. Ah yes, the mushroom girls, my initial thought was that they would just be girls with caps on and be done, but dang this shop had all sorts of mushroom type girls. And I loved it. I loved that the old pervy granny knew instantly (well… almost) what our reviewers would like. Next up on my favourite was the Grand Mage Clone arc, yes arc as it spans a couple of chapters. I loved that this mage could clone herself and let people have fun with it, with rules of course. But still, 3 days with a sweet woman who could be anything you want? Sure. However, the ending to this arc and this volume.. I will talk about that later in the review.

Of course there are also other species and stuff being reviewed, including some role playing action.

I was totally agreeing with Meidri when she found out what the guys did at a golem shop. Yep, I would have done the same thing as Meidri. 😛 While I understand why the guys did it, maybe it wasn’t the best idea.

I loved that Crim is growing up.. in the naughty ways. I had a big laugh when we find out that Crim, our little angel, is totally corrupted now and even goes to brothels on their own. Oh Crim! And they even have some plans of their own. Oh my! I just adore this as they were so pure and innocent in the beginning and look where they are now.

The one chapter I didn’t like at all, and one I am fearing seeing in the anime, is the one with the egg laying. Eww. Totally not into that.

The ending has me worried, I am just happy with the story being as it is. Reviews, sexy times. But now it feels like we are getting an enemy and suddenly have more plot than all the boobs have already provided ;). Oh well, maybe it will work and I will love it, but I will look towards it with hesitation.

The art is still amazing and I just love the style. It fits perfectly with this ecchi manga.