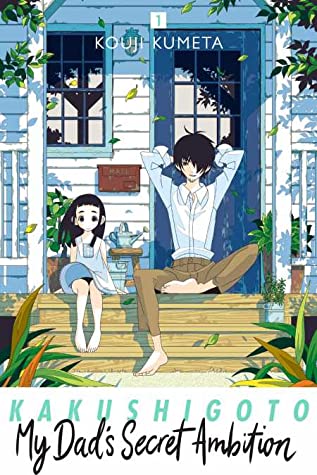 Koji Kumeta is back! This time we have a perverted manga artist and his daughter.

I am very excited about this manga/upcoming show. I love Zetsubou Sensei and I love the humour and art of this artist. It is really original and tad strange. 😛

But just like ZS I think this manga would work better as anime. I have read ZS manga (and still want to continue reading it) and I really like the manga, but it just works better as anime. The story flows better, the jokes pop out more, the characters are more interesting. I still had fun reading Kakushigoto, but I have to say I was constantly looking at the page numbers and wondering why it seemed so endless.

The story is about a man who is a single parent of a girl, his job is a bit unconventional. He draws pervy manga. Since he doesn’t want his daughter to know about it or have her bullied because of things, he draws in secret. Pretending he goes to work at x, but in the meantime going to another building to his staff. He puts all his work in a shed far away so that his daughter will never find out. Well, until her 18th birthday as we saw in the beginning. I wonder if she already had a suspicion, but given the last pages, I guess not. I loved her reaction to the manga and what she said. I wonder what happened to her father though since apparently he wasn’t the one to give her the key. I guess we will see what happens in the next volumes.

The chapters switch between the dad and seeing him do his work (or try to hide his work and also any merchandise that he spots around which had me in stitches during that festival) and we learn about the manga world, about editors, businesscards, and other writer/mangaka related stuff. And then we have the POV of the daughter as she navigates school and life.

Just like ZS there are plenty of references or hints to culture/etc. things. I had a laugh at all the references, like the fashionista den that the girls went in which was Starbucks.

I loved the relationship between the daughter and the father. They are so cute and adorable together and I love how much the father cares about his daughter, though maybe at times it is a bit too much. 😛 Then again she is the only one he has left with his wife gone, so I can imagine his daughter is everything to him and he will do anything for her to make sure she is happy and not missing her mom too much.
I was definitely tearing up when he opened the closet and found all those boxes and how he instantly knew who prepared that.

I had a laugh at how he accidentally had women left and right falling for him due to misunderstandings. 😛

All in in all, despite being a bit slow and at times not that funny, I still really liked reading this one and I definitely want more of it in my life. I cannot wait for the anime to start airing.