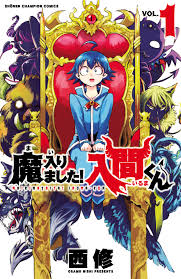 Iruma-kun’s life probably couldn’t have been worse.. and then he gets sold to a demon. 😛

I was looking around for some more manga to read and I wanted something that was silly when I bumped against this one. I have to say this was fun but I had some issues.

Meet Iruma, a human boy (looks 12 but is probably 14) and he is sold to a demon. Now this sounds pretty terrible right? But luckily the demon isn’t looking to eat Iruma… well not yet and as long as he says yes, he just wants a grandson and Iruma is perfect. I had such a big laugh when the demon confessed that is why he wanted to keep Iruma, I guess you have to get your grandchildren from somewhere right? Iruma gets to go to school and finally have a good education. Only problem, it is a demon/devil school… that means a daily bath in some perfume to mask his yummy human smell. I wonder how long it will be before Iruma is found out, or that there is something more going on with Iruma given certain things that happen in the book.

I had quite a laugh at the eccentric and weird characters that Iruma meets, the food he is eating, and oh my gosh is that Snape from Harry Potter (he has the attitude and the look at least), the school looks fabulous, and the lessons are interesting. Plus, how can I resist the whole summoning of a familiar? I want one! Hopefully something cute and not murderous.

The art was also pretty nicely done. It fits with the manga/story/characters really well.

However…. It felt really episodic to me. While it did string together as one story in the end, it just felt too much like oh here is another day in the life of Iruma, what will he do today? Who will submit to him today? What kind of stupid luck will he have now?

Yes, luck, and coincidence. Everything just went too smoothly for him. He gets to school, as the only human (gee, this sounds familiar), but due to luck he manages to impress all the students. Not late thereafter he gets in a fight which he wins… and I could go on. I don’t mind some things going smoothly, but I would like a bit less coincidence. Maybe some bad luck would make it more fun for me. Now everything just breezes into his life. I almost don’t believe he has endured all he did with his horrible parents (who really shouldn’t have gotten a kid).

That ending.. another thing that just didn’t make me very happy. Instead of being like OH COOL, I was more like OH LORD NO, why? sighs

So yeah, a bit of a mixed bag, despite the things that weren’t too fun/good I still had tons of fun reading it and laughed my butt off during several parts of the manga. Plus, as I said I liked the art! I will definitely give this one another volume before I determine if I am continuing or not.