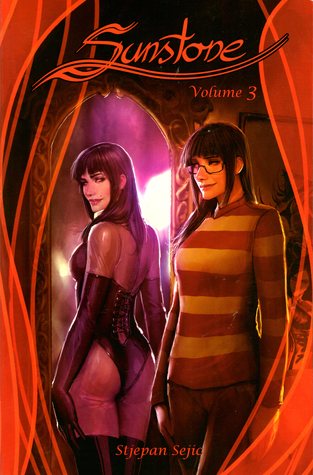 I have been keeping off from reading this one as I didn’t want to rush through the series. It is just that awesome and I want to savour it. I am glad I did because now with libraries closed and my book stack dwindling it is the perfect time to read this series (and some others I have been saving for later).

In this one there is plenty of kinky sex between Ally and Lisa and I just love it! I love the things that Ally comes up with, I love seeing Lisa go with it. Sure, I still have to get used to it all, this is my first bdsm story and in graphic novel form even, but I love it so far. There are so many fun ways to please someone. I had quite a laugh at how many outfits Ally had for her sub, despite not having a sub until now. Oh Ally. 😛
But next to kinky sex we also see these girls get closer and closer. You see them go WAY beyond the whole friends with some sexy benefits parts and I love it. These two are so cute together, and I just wish they would talk about their feelings because now they are both being eaten from the inside as they are both worried the other party may not feel these feelings. That it may destroy their friendship. But nothing will be destroyed girls, speak it out, say it loud!
We do see some progress in a way. Namely Ally asking at an awkward moment for Lisa to live with her (for a whole bunch of reasons). I loved that! And I loved seeing her consult with her best friend about it. Though, I think the execution could have been better. 😉 Ah, and we also see Ally try to figure out her feelings. She never fell for a girl, but now she is falling hard. She is questioning her sexuality.

Next to Ally and Lisa we also have Anne and Cassie, and while I did like it at times, it is just the honest truth that I read these graphic novels for Ally and Lisa, not for anyone else. And I don’t mind meeting people, I don’t mind seeing Ally/Lisa say hi to people, but if people take away my time with my girls.. well. Plus, while I do like Cassie and her husband and see how they got together (and their marriage was just awesome), I am just not a fan of Anne. I mean, you don’t ask things like that to someone you don’t know well enough. If I was Lisa I would have raised my hand in the stop signal and say no. You don’t ask about people’s sex life unless you know them well enough. I get you are curious, but maybe you should just keep the questions to people you know well, or the internet.

I also still think it is hilarious there are so many red-heads in the series (even Ally made a remark about it in this one). I can tell you I haven’t seen many redheads in my life. I had a girl with red hair in my elementary school class, and I have seen a couple walking around, but that is it.

I still love Alan and I love seeing him pop in the story. While he is unfazed at what he will see when he goes to his friend Ally, he does get flustered when he sees the girls in actual outfits which let to a delightfully hilarious scene that had me laughing so hard. I am so glad that he and Ally have been able to stay friends. I know my exes and I don’t have that.

The art is fricking gorgeous though at times a bit jarring as we go from OMG 100% top art to a bit less but still good art.

Plus, I like that we go to the now (at least I guess that is the now) and see Ally and Lisa how they are now (and they are still together… cheers).

2 thoughts on “Review for Sunstone Vol.3”