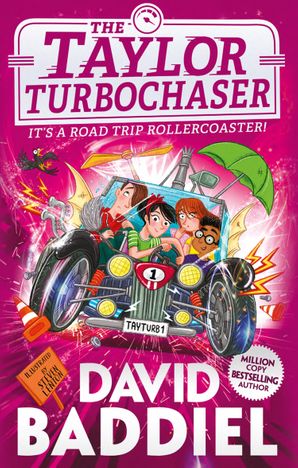 A girl in a wheelchair becomes a racer. Sadly, it sounded much more fun than I actually thought it was.

I was truly looking forward to all the fun, David Baddiel writes such fun books that you just want to read over and over again. I was loving the fact this one would be about a girl in a wheelchair, we definitely need more characters in books in a wheelchair. I also liked the idea of inventions and racing. Also I read this one in Dutch, so I am using the Dutch names as I have no clue about the English ones.

But the story just lacked and it was just all a bit too much coincidental at times for me. That is why I tagged it as a octarine, aka magic. The trip was fun, don’t get me wrong, I loved that the kids were this dedicated to get somewhere and put their best foot forward to get it all done, but it was just too magical for me. I knew I would have to suspend my believes given the fact the girl is driving in a car while never driven and the fact someone made a car like that (though yes, I loved that someone could think of making a car out of every item possible + a wheelchair as its basis), but it was just too much for me. Every time the kids were almost captured something would happen. POOF the car had some magical new function. Poof they would escape by doing x or y. Of course I was hoping the kids would get away, but I would have liked to see it happen in a different way. Same goes for how their journey went, it just felt forced that they had so many things happened. The restaurant? The field? The road being full of cars?

As I said, it was also pretty magical the girl knew actually how to drive. I am sorry, I play enough racing games, but believe me I would crash a car if I would try to actually drive it without actual car experience and someone giving me lessons. 😛 And I understand the car is essentially a souped up wheelchair, but still you need a bit more knowledge on how cars work before you can drive. 😛

The parts with the parents, meh.

And I am deducing one star for two characters. Jessie and Jack. I didn’t like them at all. Jack had some parts that redeemed him a bit, but other than that he should stop doing his work as an echo well + his constant remarks were just getting frustrating. I get he is a teenager and I remember myself as teenager, but come on. You could be a bit kinder at least.
Then there is Jessie. My lord, how does that girl even function given her limited knowledge of EVERYTHING in life. I even read parts to my husband and he agreed that he was amazed she had enough brain cells to even breathe. She made the stupidest comments that even a child aged 4 would know, she had a total disregard to the journey (given she texted her parents and didn’t think about a gps tracker). I don’t mind characters who make the occasional dumb comment, we all do that throughout our lives and then we giggle and wonder why we said that. However if a character is constantly this way… it doesn’t get fun it becomes annoying.

Despite so many meh points, I did fly through the book. I had to stop at 143 on the first day as I could only read in the hour I had before sleeping, which I wasn’t too happy with but hey, one has to sleep especially now. The next day I just flew through the remaining pages. Yes, I rolled my eyes, yes I groaned, but David Baddiel still has that writing style that keeps you reading. Plus, I loved Amy’s backstory, why her father left and how the family is doing now. I loved how kick-ass Amy was + I loved that she loves cars and racing. Plus, the illustrations were just fabulous.
But yeah, too many points that had me going meh, so I am just giving this one 2 stars. I hope the next book by this author is much more fun and features some great characters.