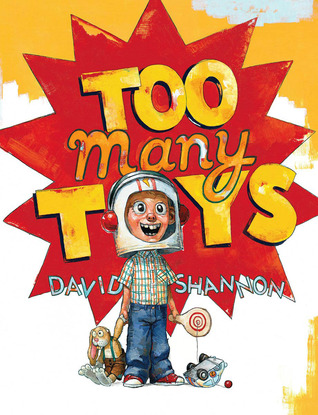 A boy just has too many toys! Really, the house is just overflowing!

I was looking on Youtube for some new picture books being read aloud and that we can read along. Sometimes I just want someone to read a book to me, just like when I was a kid. I found this one and the video was great. Especially since someone kept stacking toys on the guy who was reading the book, very fitting for the book! Also the guy was really good at doing voices (and he did some interesting faces as well).

A boy has MANY MANY toys. Yes, really, this kid could start a toy store with all the stuff he has collected and been gifted. Though most of them aren’t working, so eh. Maybe someone still wants it though. I loved seeing the home stocked full to the brim with toys, toys and more toys. Oh my. Spencer, boy, we need to talk. 😛

I did think it was irresponsible that the parents and everyone else gave the kid toys and toys and toys. I mean, the kid is clearly having WAY too many toys and why are you giving him more? And why are you screaming at the kid later on? You gave him all those, just like everyone around you did. Maybe you should take responsibility first.
But hey, I am glad the mom finally took action, and helped Spencer with taking out the toys. We all know how kids are with throwing things away. Everything has a use (despite not having heads), everything still is precious, even though they never play with it or haven’t played with it for years. I am glad that the parents put their foot down.

The ending was just the best. Poor mom, but I am glad that Spencer has found something new and something that is way more precious than toys. I won’t spoil what it is though. You will just have to read.

The art was OK-ish. Not entirely my favourite and that mostly had to do with the faces/the eyes. Not my cup of tea. But I did like how many details there were on each page.

All in all, a pretty fun book about toys and a boy with too many of them.

2 thoughts on “Review for Too Many Toys”