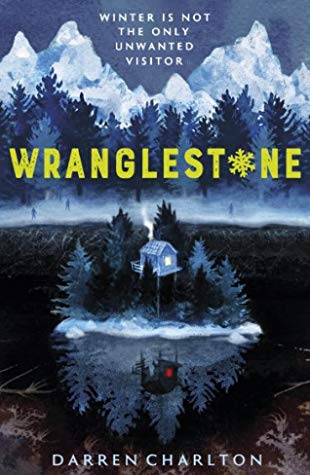 Zombies, twists and turns, secrets, and a very sweet romance that had me shipping like mad.

I was in need for a new zombie book and when I saw this book a few months ago I knew I had to pre-order it. After some issues (Amazon didn’t seem to get it in stock, so I turned to BD but that always takes 2 weeks before it arrives) I finally received the book and I could read it. I was immediately sucked in. The setting, the romance, the creepy zombies lurking in the woods, OMG.

Since I am bit tired after a busy day I will write this review as a good/not so good review.

Let’s start with the Good, and there is A LOT of that.
-Cooper and Peter’s relationship. I just LOVE when we have a romantic plotline in a book that is so grim and dark. And these two have the cutest relationship. Peter has been pining for Cooper for ages, which includes chopping wood in the morning as Cooper is passing by with his canoe. Yup. This boy chopped so much wood they can live for the next winters. 😛 Though Peter is pretty oblivious to Cooper’s feelings and at times I just wanted to throw him in the water. COME ON, he asked you out. Isn’t that obvious enough for you? Then again, a part of his obliviousness stems from his insecurity.
Later on there are added things to their relationship that need to be talked about and that needs to be looked at. It won’t be easy, but I know for sure that these two will make it.
-The zombies. They were spooky and creepy and it was just haunting how the zombies would appear along the shores waiting and lurking.
-The fact that the whole community was on stilts/on islands. I would have definitely loved to see more of this community in other seasons other than late fall and beginning of winter. Sure, we get plenty of descriptions which had me very happy, I could already envision the kids and adults swimming in the lake (though I was also disgusted as people did seem to poo/pee in it….) and having a great time. I loved that everyone’s mode of transport was canoe.
-This is a spoiler so I am putting it under spoiler tags. -The secrets. What really was Wranglestone? Why is it so important? What is going on with the bringing of those who are infected/bitten? It was really interesting to see everything unfold and to see every bit of the puzzle come together. I really had so much fun trying to figure it out on my own before the author would show/tell us. I loved the secret and OMG, that could have changed so much.
-That Peter was gay and that no one in the community seemed to mind or care. Instead people were rooting for them (and then especially the dad and Darlene). I also loved that he was so well with his hands and could fix anything if it was crafts related. While it may not be the best skill to have when zombies want to chomp your head… it is a useful skill in the end. Especially since someone has to make the clothes (though it seems they just strip the zombies here, um eww) and make homes feel warm and safe.
-There are many scary and frightening scenes that had me on the edge of my seat. The author wrote them really well.
-The ending and all that happened there. OMG, I already couldn’t stop reading and now I was just flying through the pages as it was just too good. Of course, I won’t spoil anything, but I will tell you it sets a nice base for a next book.
-The dad was a great character. I loved how he cared about his son. PLUS, something you don’t often see in zombie books, he has epilepsy. He has something that may hinder him in this world, yet he perseveres and has been living in this topsy-turvy world for 16 years.
-Rider! I just loved his character, though I also wanted to give him a big big hug for all he has encountered in his life. For all that happened to him and his family.

Not so good:
-It just felt a bit too convenient what happened to

What I would like to see:
-More of the world surrounding this park. I would love to go to towns and cities and see how things are there.
-I wouldn’t mind a prequel with the story of the dad and mom of Peter and see them seek sanctuary in this crazy world.
-More Rider please!

All in all, I could probably talk about this book for ages. I just love it so much. I would highly recommend it if you are looking for a zombie book with lgbt romance and tons of secrets. I can’t wait for the next books, and again I want a prequel!

2 thoughts on “Review for Wranglestone”