A warm welcome to the Book Blitz for Scarlett St. Clair’s newest book: A Touch of Ruin. You may remember that I featured this book (and the first) late last year when I participated in the fantastic Cover Reveal for both books. So you can imagine I couldn’t resist also helping out with this Book Blitz.

What do I have for you in today’s Blitz? You can read a brand-new excerpt from the book, some teasers, I got an INT giveaway in which you can win a gift card, and of course there is book/author information. 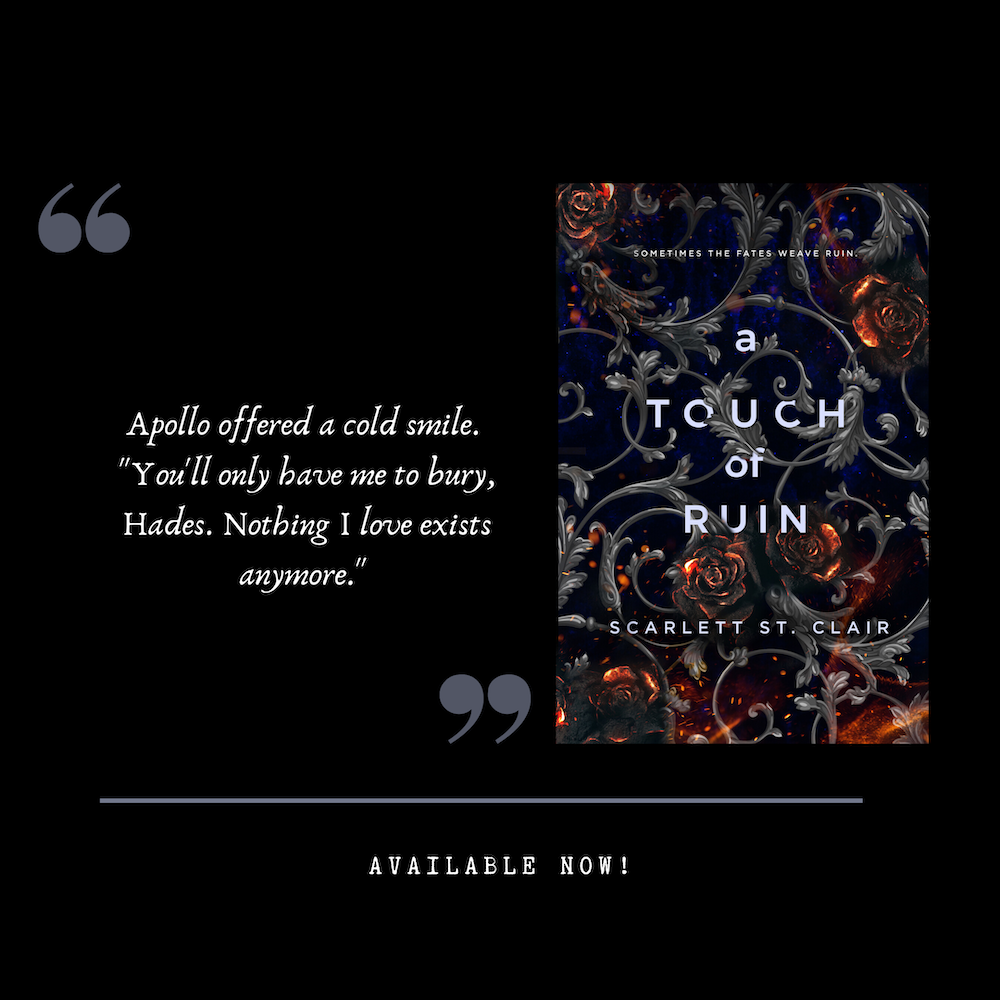 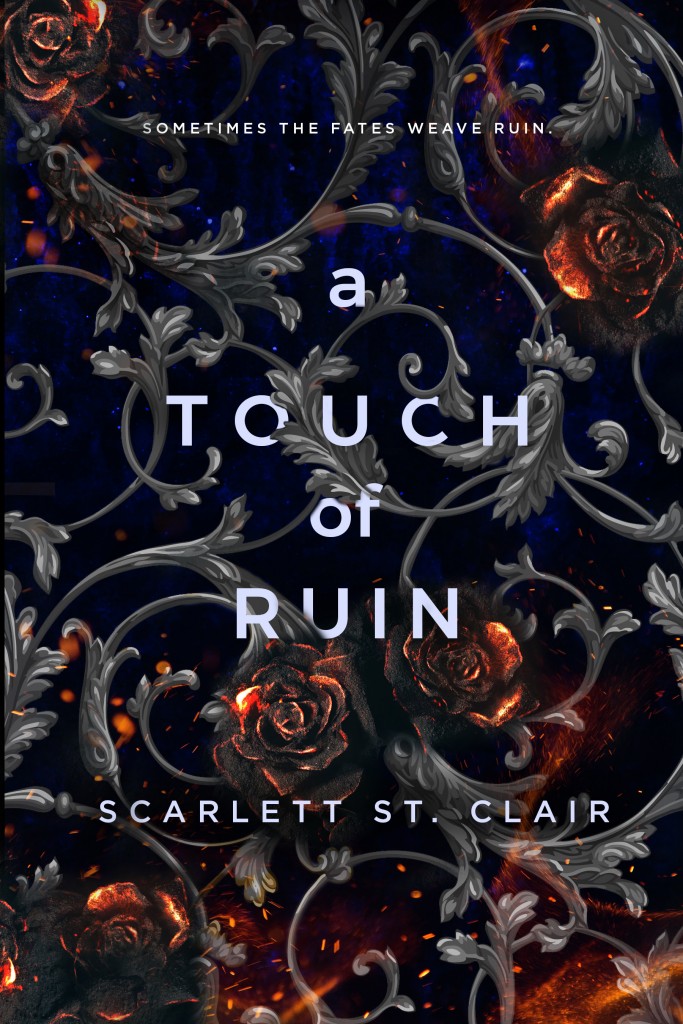 Persephone’s relationship with Hades has gone public and the resulting media storm disrupts her normal life and threatens to expose her as the Goddess of Spring.
Hades, God of the Dead, is burdened by a hellish past that everyone’s eager to expose in an effort to warn Persephone away. Things only get worse when a horrible tragedy leaves Persephone’s heart in ruin and Hades refusing to help.
Desperate, she takes matters into her own hands, striking bargains with severe consequences. Faced with a side of Hades she never knew and crushing loss, Persephone wonders if she can truly become Hades’ queen. 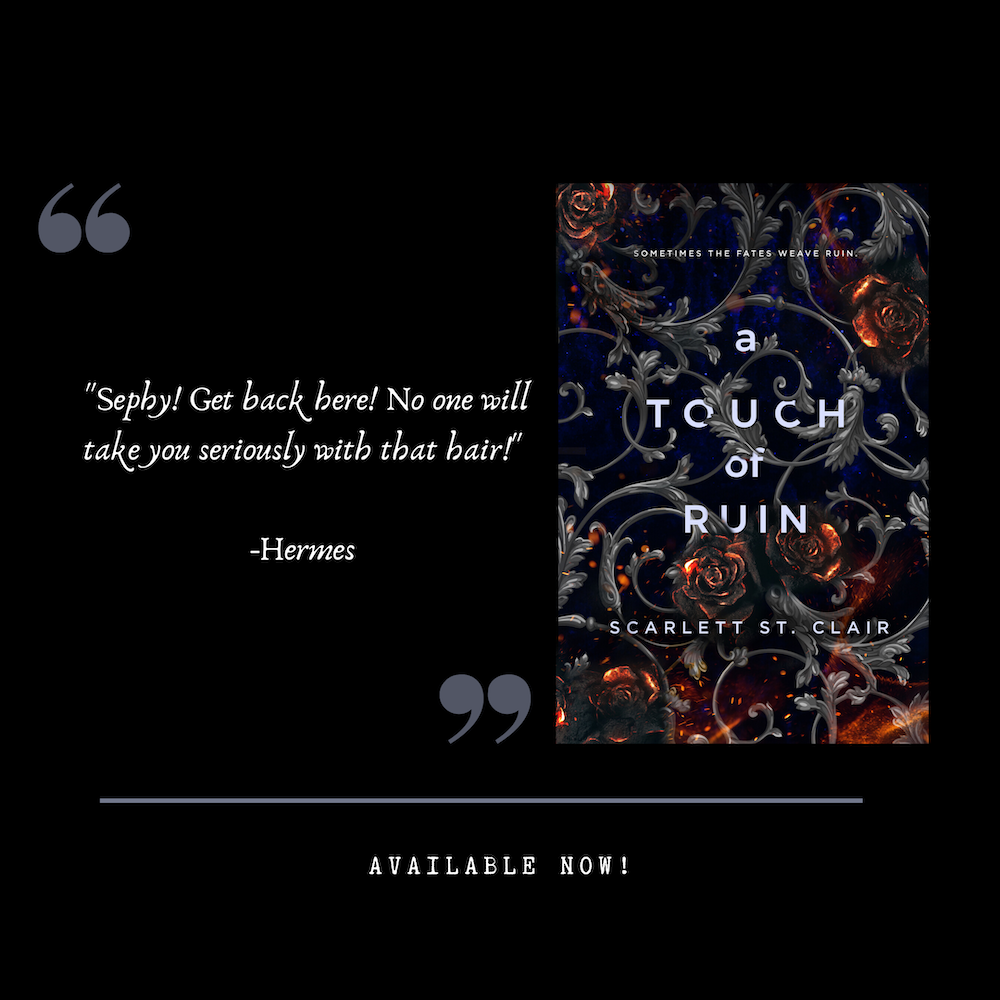 Scarlett St. Clair lives in Oklahoma with her husband. She has a Master’s degree in Library Science and Information Studies and spends a lot of time researching reincarnation, unsolved murders and Greek mythology–all of which made it into her debut novel, When Stars Come Out.

Excerpt from A Touch of Darkness

She left the safety of the car and kept her head down as she walked in the direction of the Acropolis. The roar of the crowd amplified as she neared, and she paused when she was within view—it had grown.
“Gods,” she moaned.
“You really got yourself into a pickle,” a voice said from over her shoulder. She spun and found a handsome, blue-eyed god standing behind her.
Hermes.
Over the last few months, he had become one of her favorite gods. He was handsome, funny, and encouraging. Today, he was dressed like a mortal. Well, for the most part. He still looked unnaturally beautiful with his golden curls and glowing, bronzed skin. His outfit of choice was a pink polo and dark jeans.
“A…pickle?” she asked, confused.
“It’s an expression the mortals use when they find themselves in trouble. You haven’t heard of it?”
“No,” she answered, but that wasn’t surprising. She’s spent eighteen years in a glass prison. She hadn’t learned a lot of things. “What are you doing here?”
“Saw the news,” he said, grinning. “You and your boy-toy are official.”
Persephone glared.
“Man-toy?” he offered.
She still glared.
“Okay, fine. God-toy, then.”
She gave up and sighed, burying her face in her hands. “I’ll never be able to go anywhere again.”
“That’s not true,” Hermes said. “You just won’t be able to go anywhere without being mobbed.”
“Has anyone ever told you you’re not helpful?”
“No, not really. I mean, I am the Messenger of the Gods and all.”
“Weren’t you replaced by email?”
Hermes pouted. “Now who’s not being helpful?”
Persephone peered around the corner of the building again. She felt Hermes chin rest atop her head as he followed her gaze.
“Why don’t you just teleport inside?” he asked.
“I’m trying to maintain my mortal façade, which means no magic on Earth.”
She didn’t really feel like explaining that she was training to control her magic.
“That’s ridiculous. Why wouldn’t you want to walk down that enticing runway?”
“What about normal, mortal life don’t you understand?”
“All of it?”
Of course, he didn’t. Unlike her, Hermes had always existed as an Olympian. In fact, he’d begun his life the same way he lived it now—mischievously.
“Look, if you aren’t going to help—”
“Help? Are you asking?”
“Not if it means I owe you a favor,” Persephone said quickly.
Gods had everything: wealth, power, immortality—their currency was the currency favors, which were, essentially, a contract, the details to be decided at a future time, and unavoidable.
She’d rather die.
“Not a favor then,” he said. “A date.”
She offered the god an annoyed look. “Do you want Hades to gut you?”
“I want to party with my friend,” Hermes countered, folding his arms over his chest. “So gut me.”
She stared at him, feigning suspicion, before smiling, “Deal.”
The god gave a dazzling smile. “How’s Friday?”
“Get me into that building and I’ll check my schedule.”
He grinned. “On it, Sephy.”