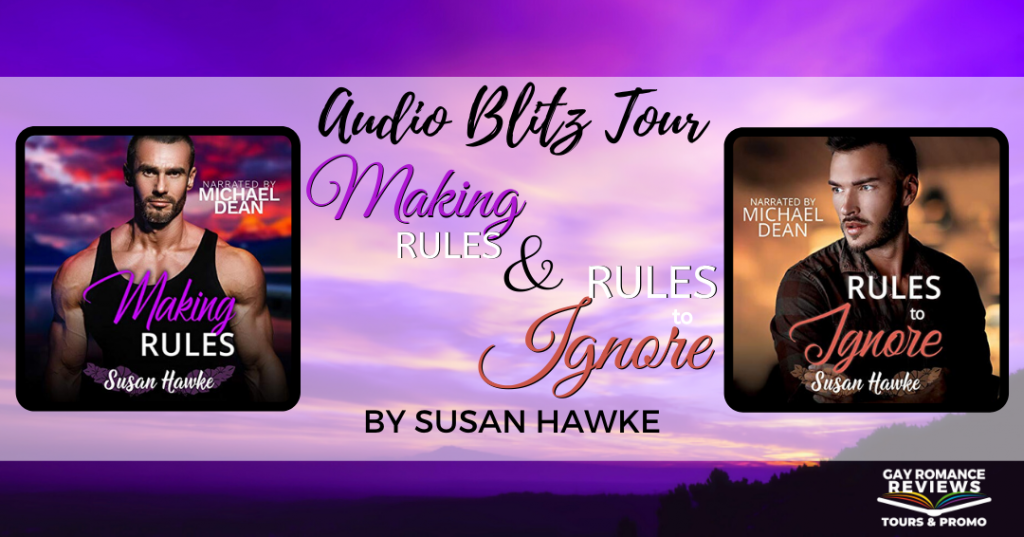 Welcome all to an Audio Book Blitz for not one book, but two! Today I am featuring Making Rules and Rules to Ignore by Susan Hawke! I am very excited about these two books and definitely will be reading them and the series.

For today’s blitz I got a whole lot of things. For instance you read an excerpt, but there are also teasers, and there is of course author (and narrator)/book information!

Are you reading? Let’s get started. 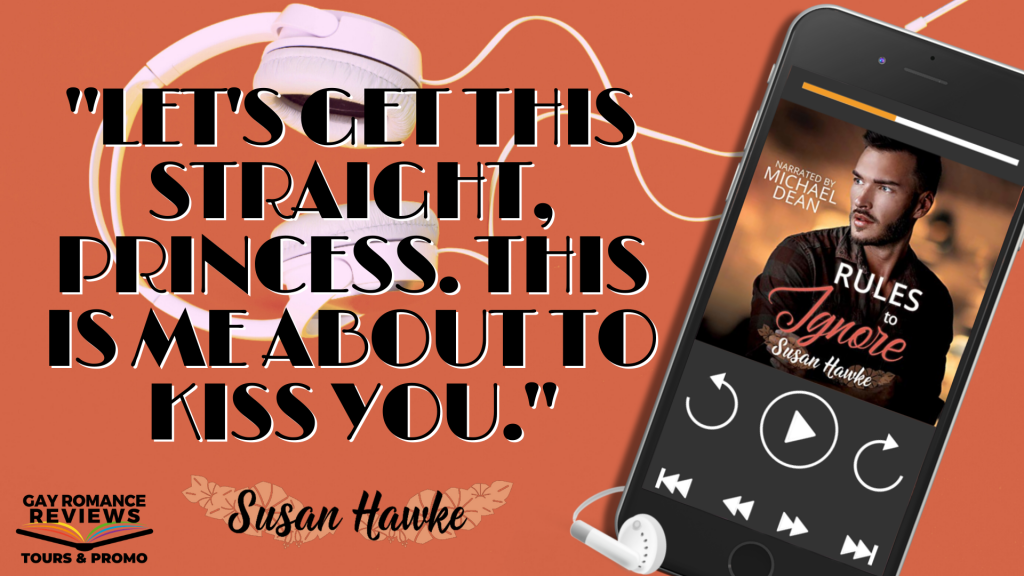 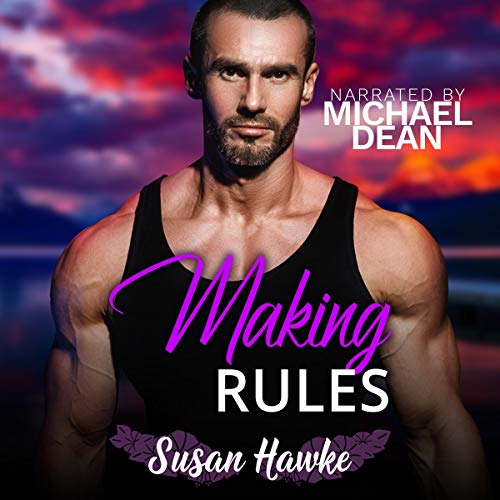 Before Davey came to work at Daddy’s Lap and began that crazy list of rules, his future bestie, Sammy, was already living happily ever after with his own Daddy-dom. From the moment they met over a gas pump to the day they were legally able to wed, leather Daddy Raphael Robustelli adored his linebacker-sized boy. This is their love story, as seen through a series of six short vignettes. Witness the moment they met, see the first time Davey came to the club, and so much more. This is a short 20k volume, filled with emotion and backstory for the entire series.

NOTE: This is not a full-length book and does not contain a new couple. This can be read as a standalone but will be most enjoyed by those who have read the series.
This is the sixth book in a series about not-so-perfect Daddies, adorable “boys,” and one sassy brat with an insane list of rules. Grab your fan and tissues because this series comes with both a high heat advisory and all the squishy feels you’d want from a Susan Hawke book. 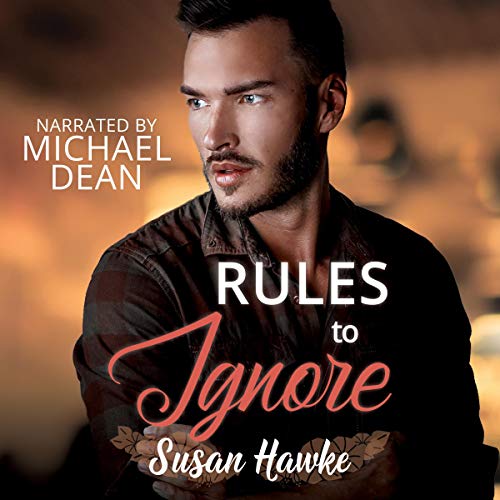 Davey’s Revised Rule #1: A good Daddy will love his boy with all his heart.

Davey Hendrickson doesn’t mind being forever single when he’s got his bestie at his side. It’s not that he wants to be single. He’s spent most of his adult life searching for his own perfect Daddy. Even if he’s not naturally submissive, someone that fabulous is obviously meant to be a boy… right? Over the years, he’s dated every type of Daddy imaginable but not one of them could come close to meeting the requirements from his ridiculous list of rules.
After losing his husband, Sammy Robustelli has learned to be strong while raising two children on his own. No matter what life has thrown his way, nothing seems too hard with his best friend and roomie Davey at his side. When the two friends learn that people believe they’re a couple, they can’t help but laugh. The very idea is a big joke… until it isn’t.
It only takes a few wake-up calls before Davey wonders what happens if a guy might be in love with the best friend he can never have. It could never work for a pair of boys in need of a bossy top, right? Except… maybe Davey doesn’t know himself—or Sammy—as well as he thinks.

This is the final book in a series about not-so-perfect Daddies, adorable “boys,” and one sassy brat with an insane list of rules. Grab your fan and tissues because this series comes with both a high heat advisory and all the squishy feels you’d want from a Susan Hawke book. 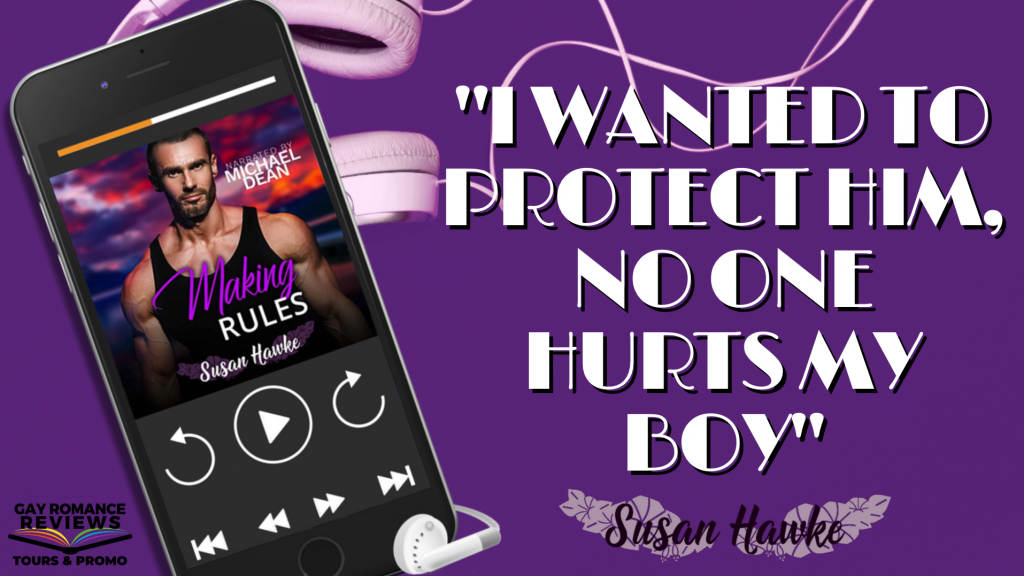 As an avid reader and big romance fan myself, I love sharing the stories of the different people who live in my imagination. My stories are filled with humor, a few tears, and the underlying message to not give up hope, even in the darkest of times, because life can change on a dime when you least expect it. This theme comes from a lifetime of lessons learned on my own hard journey through the pains of poverty, the loss of more loved ones than I’d care to count, and the struggles of living through chronic illnesses. Life can be hard, but it can also be good! Through it all I’ve found that love, laughter, and family can make all the difference, and that’s what I try to bring to every tale I tell.
I’m a happily married mom with one snarky teenage boy, and three grown “kids of my heart.” I’m more widely known for my mpreg writings as Susi Hawke; this new name is a departure from that. Whether written by Susan or Susi, the books are filled with that all-important love, laughter, and family I mentioned; the only difference is that this name has no male pregnancy. I look forward to sharing my stories with you, and to bringing more romance and laughter into this world that needs it so very badly. 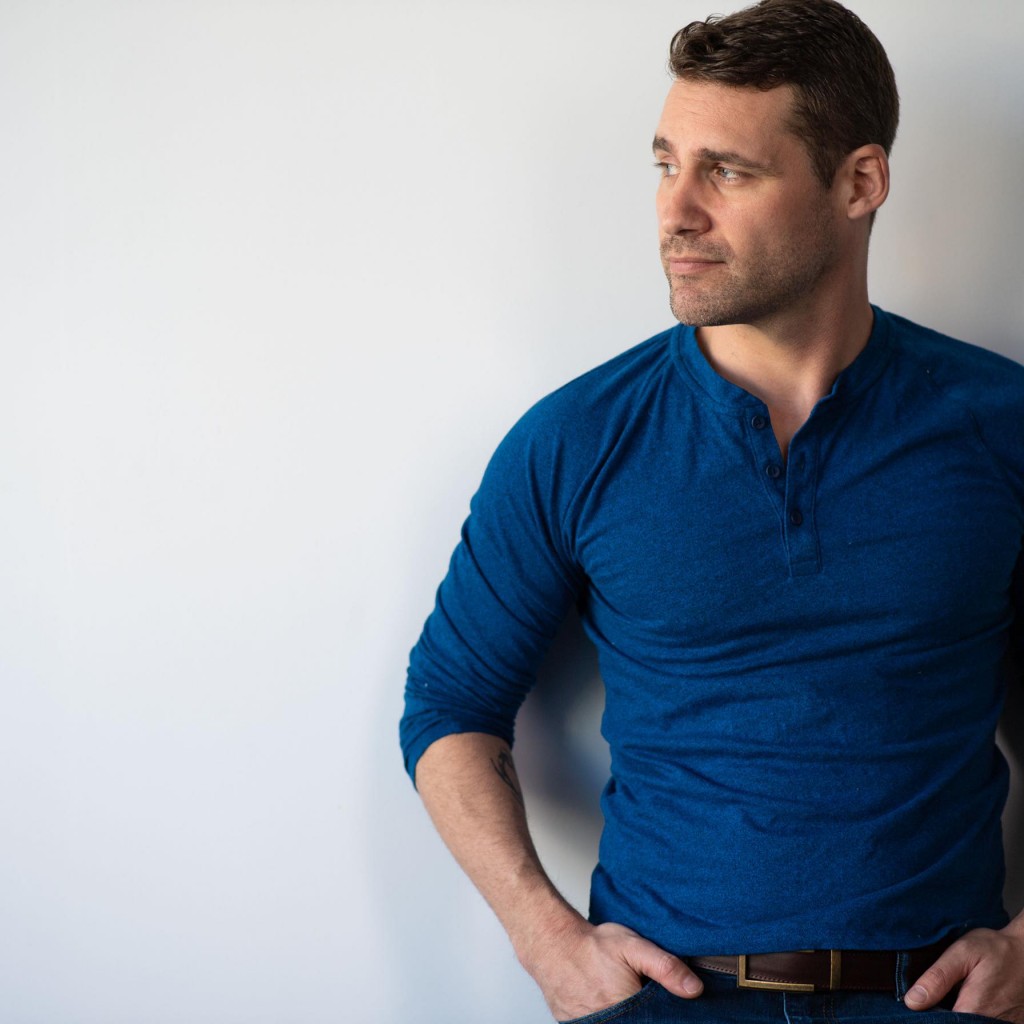 Michael has well over 50 audio book titles currently available for purchase on Audible.com. He is versed in multiple styles and genres including fiction (novels and short stories) ranging from romance to science fiction to crime dramas to thrillers; business strategy books; health and wellness books; and even an occasional children’s book.
Fans of Michael’s narration are welcome to follow him on social media including Facebook, Twitter, Instagram, YouTube, and SoundCloud.
If you are interested in working with Michael to produce your next audio book, you can contact him directly at voice@michaelpauley.info 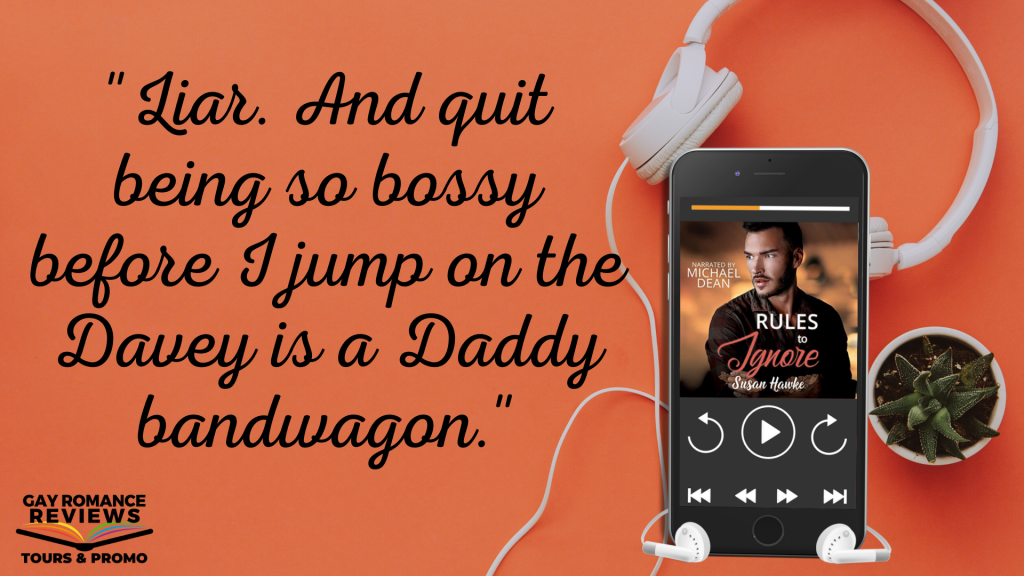 Davey keeps being told he’s more Daddy than the boy he’s always assumed himself to be. In this snippet, he’s looking for people to agree that the idea is ludicrous. First his “baby stepdaddy” and then his friend Adam, but neither give him the reaction he expected.
*****
Cameron asked about Sammy and the kids, which had me spilling the beans about how the people at the school had thought we were a couple. And how Preston had dared suggest that I, of all people, might not be a boy. “…And to make matters worse, my own chef at the club mistook me for a Daddy, too. Tell me, Cammy-Cam… how weird is that?” I didn’t know why I was dwelling on this so much, but I hadn’t been able to get it out of my mind over the past couple weeks.
He studied me for a bit before shrugging. “I don’t think it’s weird at all.” He hesitated for a moment. “Since we’ve always been honest with each other, I’m going to say this. Have you thought about what Preston said? Maybe try to consider that you’ve never found a Daddy of your own because you’re not really a boy?”
I sputtered, glad I didn’t have a drink in my mouth when I heard that. “For real? You too? I feel like nobody really knows me and that makes me sad.”
Cameron hummed softly, moving his head from side to side. “Or maybe we know you better than you know yourself?” When I gasped at that, Cam held his hand out and started naming off Daddy traits, ticking them off one finger at a time, just like Preston had.
I couldn’t get mad at baby stepdaddy, not when he was so adorably earnest. “Think about it, Davey. You’re protective. When you see something needs to be done, you handle it. I’ve seen you do a lot of kind things behind the scenes and not even take credit. You’re right there to offer help when you find someone in need. I could go on, but I think I’ve made my point.”
“Pshaw, doll. That’s just called being a decent human. For one thing, I’m too small to be a Daddy. And for another, I’m way too fabulous.”
Cam snickered, waving his hands as if he couldn’t handle it. “Davey, you can’t call yourself small when you’re like six feet tall. The problem is that you’re drawn to bigger guys. If you preferred twinks like me, you’d probably have an easier time seeing what everyone else does. Or do you just gravitate toward big guys because you think they’re more Daddylicious and automatically ignore smaller ones that you assume are natural boys? If that’s the case, you need to pay better attention to your clientele.”
Huh? I rubbed the back of my neck, trying to make sense of what he was saying. Cam bumped his shoulder against mine. “I mean it, Davey. Think about it, you’re taller than a lot of the Daddies at the club. Sure, you’re still smaller than one or two of the boys—especially the ones like your friend Sammy—but that doesn’t have to be a problem unless you make it one. Size has nothing to do with being a Daddy, from what I’ve seen. Does it make Sammy less of a boy?”
Cheese and crackers, he had a good point and I didn’t know how to respond. We talked a little longer before I left. Thankfully, that was with a bag full of leftovers. I thought about breaking out the lemon bars while I drove but ended up calling my buddy Adam instead.
As soon as he answered, I had the presence of mind to ask about his new foster daughter before I started babbling about my own drama. After I filled him in on this whole Daddy ridiculousness, Adam didn’t react like I would’ve expected.
When he was silent, I double-checked the light on the Bluetooth. “Hello? Say something, doofus. Can you believe all that crap?”
Adam sighed. He did it softly, but I didn’t miss the soft release of breath. “Honestly? Yes. I totally can. I’ve never wanted to bring it up with you, but I agree with Preston and Cameron. Davey, babe… I truly don’t think you’ll ever find the Daddy you’re looking for because you aren’t naturally submissive.”
My mind was blown, so I blew it off with a joke. “Bottom said what? I don’t know, but I guarantee it wasn’t anything like ‘give it to Daddy harder, boy.’” I snorted, shaking my head at finding myself in the same crazy conversation with yet another person. Seriously, does nobody know me at all? “Adam, you’ve known me forever. Can you really see me turning into a dominant top anytime soon?”
Adam chuckled softly. “I guess you’ve never heard of topping from the bottom, huh? Because that I could totally imagine you doing. Seriously, what does topping have to do with anything?”
I was so stunned that I nearly missed the freeway entrance. “Wait… are you saying what I think you are? There are boys who actually top?”
Adam laughed even harder. “Typical Davey. You get an idea in your head and never look for other options. Of course there are boys who are tops. Your favorite sexual position or preference has nothing to do with whether or not you’re a dominant type. Or even a submissive, for that matter.”
Thankfully my phone beeped right then with an incoming call. “Adam, let me put you on hold. I have another call coming in.”
“Nah, it’s cool. I have to go anyway; Mickey will be waking up from her nap soon. Think about what I said, okay? We’ll talk again soon.” I smiled as I pushed the button, thinking about Adam being a father now. I really need to drop by with a gift for the baby girl. And definitely something with Mickey Mouse on it.

This Audio Blitz was organized by: