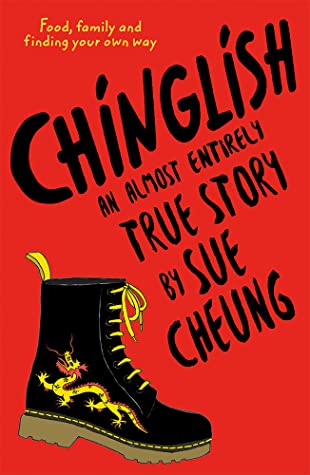 A diary about a teen girl who, through diary entries, will tell us all about her family, the takeaway, her friends, being Chinese-English, and more. But it wasn’t what I expected.

There is child abuse, negligence, animal abuse, racism, bullying, underage smoking (8-year old smoking), and I just didn’t expect it. Going by the blurb I found this was a funny, silly diary about a Chinese-English girl who tries to find a place in the world while juggling her Chinese and English identity and never feeling truly home. Then there is a takeaway and I was curious to see how that one would come in the story. So yeah, it was a pretty OK-ish book with good moments, I am glad I had the chance to read it. But it just didn’t work for me with the quirky/fun-ish writing and then all the darkness.

Meet Jo, Joanne, or her Chinese name: Yenzi. She is a 13/14 year old girl at the beginning of the book and has just moved to a new home. It isn’t a big home and she is having a hard time with it. I could imagine, you don’t just stuff 4 people in a tiny house with just 2 rooms. Plus, new people to befriend. But there is a brighter spot in the horizon, her grandparents and her brother are living closer by. Throughout the book we see her grow up, she goes from around 14 to 16+. We see her struggle in life and in school. The only thing that makes her truly happy is art! Yep, this girl can draw and I just loved seeing how with each year she got better at it. It was a fun progress and I was rooting for her each time she set new goals and entered competitions.

I loved Tina, especially in the beginning and then later again. She is a real friend to Jo and one of the girls who really stands by her side. I just loved her style and I loved that she wasn’t afraid to tell the bullies a piece of her thoughts. It was great to see her celebrate Jo’s birthday, as nobody really celebrated that in Jo’s house.

Gurdeep was a bit weird, I wonder if the girl herself noticed or not. 😛 I had a big laugh though how she grew up and turned out to be.

I was a bit shocked at the child abuse, the book quite made it seem like this would be a funny, light-hearted book about a girl finding her place in the world, how the takeaway worked, how her family was. But right from the start we have negligence, Bonnie (the youngest at that part of the book) is smoking, stealing (well her brother and sister do it as well), selling stolen stuff and more. Jo, our MC, has to take care of her sister making sure she has clothes and food. This was already pretty, OMG parents whut? But then later on the book gets REAL dark when we find out why they moved, why Simon (the brother) left the house, and see various terrible abuse happen by the hands of the father which was just OMG, holy NOPE.

I really wasn’t a fan of the parents. You have lived in a country for years, LEARN THE FREAKING LANGUAGE. >< I don’t give a dip that you have work, just find someone to help (and not your freaking kids thank you). It will make everything easier and maybe you will feel happier.
Plus, the parents apparently didn’t give a fig that the kids were trying hard to set their own paths, Simon got a lot of hate because of his future plans.
Later on there is a new addition to the family, and I was just NOPING all the way. Why the hell? You already can’t handle the two kids you have and are already neglecting them and you know how the father is, what in the hell possessed you to do this?

Just want to vent about the animal abuse and how it was all done about in a humorous (in my eyes at least) way.
A big -1 star for the animal abuse. 1). you don’t hoover up a hamster and then just not take it to a fucking vet or someone who knows about animals. You don’t just throw it back in the cage and just hope it may come to live again. 2). you then don’t proceed to go to the park and release a fucking tame animal who is still traumatised and sick. 3). You don’t get a new hamster and then proceed to have your dad take it on walks and thus losing it. 4). You don’t take goats as they may be easier to care for and give them all sorts of shitty food to eat. And you don’t rip apart two animals who have been together for ages like that. 5). You don’t get a dog if you have failed to care for all the above and then proceed to feed it fucking donuts? And other junk food? Don’t give it training or whatever? 6). And just no to the bird. 7). Someone needs to fire that pet store owner of the first hamster for letting a freaking 8 year old just buy it on a whim.
This really ruined the book for me. I hate animal abuse and I was already seriously pissed at the poor hamsters being treated like absolutely shit, but then other animals showed up and my frustration and anger at these people grew and grew.

Would I recommend this one? Eh, not sure. Again, maybe if it was less quirky/funny written and more serious + the blurb updated and some warnings added I may have given it a different rating. Then again, if I had known about the abuse I may have just not tried it.

2 thoughts on “Review for Chinglish”